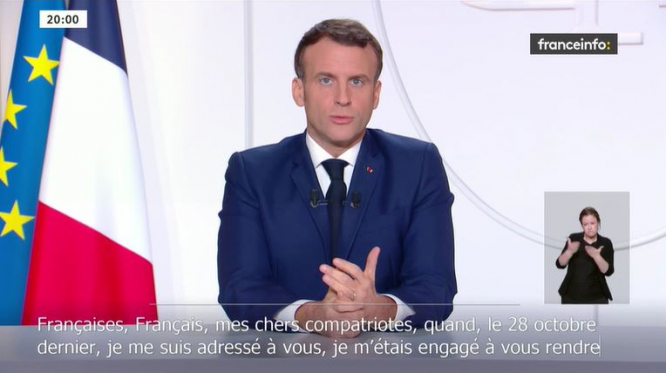 President Emmanuel Macron announced a three-stage easing to lockdown measures for France, beginning on November 28. The second phase begins on December 15 and involves the current confinement being replaced by an overnight curfew beginning at 20:00.

What changes on December 15?

France’s lockdown will end on December 15.

Prime Minister Jean Castex said on December 10: “Christmas occupies a special place in our lives and traditions... We therefore authorise travel for the evening of December 24, but I remind you of the rule I indicated to you last week: no more than six adults together at a time."

Health Minister Olivier Véran warned on December 10 that people that getting a Covid test before Christmas meals is still risky and should be avoided.

He said: “There is a risk that the test will be negative because you are not yet sufficiently contagious.

“On paper it may seem like a good idea, but we must also avoid overloading the laboratories, pharmacies and doctors who carry out tests. You can, of course, be tested, but please don’t use the test as some kind of immunity totem.”

There will only be a few accepted reasons to go out during the curfew, including travel between home and work, health reasons or compelling family reasons. Taking a pet for a walk will also be allowed.

Controls will be in place.

Mr Castex confirmed that ski resorts will not open before the Christmas holidays.

He said it will be possible to go to the resorts to “enjoy the pure air of our beautiful mountains” but that ski lifts and public facilities there will remain closed.

On November 24, Mr Macron said that talks are to take place between the government, local officials and industry professionals and a decision on when ski stations can open will be made soon.

Mr Castex has said that working from home will remain the rule wherever possible until at least January 20, 2021.