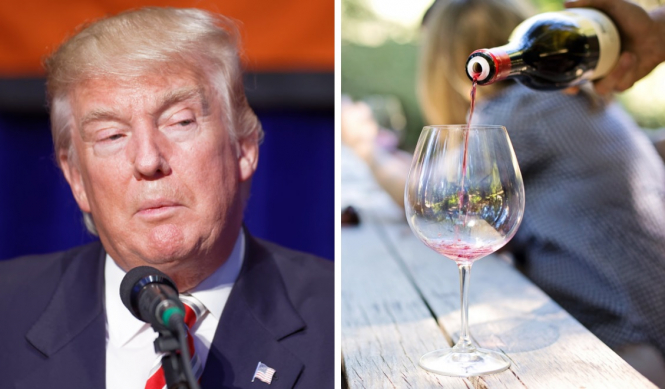 US President Donald Trump made the threat in a tweet, which was swiftly responded to by French minister Bruno Le Maire
By Connexion journalist

In a tweet, Donald Trump said: “France just put a digital tax on our great American technology companies. If anybody taxes them, it should be their home Country, the USA. We will announce a substantial reciprocal action on Macron’s foolishness shortly. I’ve always said American wine is better than French wine!"

France just put a digital tax on our great American technology companies. If anybody taxes them, it should be their home Country, the USA. We will announce a substantial reciprocal action on Macron’s foolishness shortly. I’ve always said American wine is better than French wine!

Mr Trump was referring to the decision by France to impose extra tax on global technology and digital giants - dubbed the “GAFA tax”, named for the four major corporations Google, Apple, Facebook, and Amazon, although slated to apply to any qualifiying company, regardless of nationality.

While a Europe-wide consensus on the tax is expected imminently, in January this year, France decided to push ahead with its own tax, after growing tired of months of slow negotiations in Europe.

In January, French President Emmanuel Macron shared his support for the decision. Mr Macron said: “Big businesses that make profits [in France] must pay their taxes, it is only fair.”

Minutes after Mr Trump’s tweet, French economy and finance minister Bruno Le Maire hit back, saying: “Universal taxes on digital activities is a challenge that concerns all of us. We would like to come to an agreement on this issue in the context of the G7 and the Organisation for Economic Co-operation and Development (OCDE). In the meantime, France will implement its own national decisions.”

In a press conference yesterday (Saturday July 28), Mr Le Maire again responded, in both English and French, in a deliberate message to Washington.

He reiterated his “total determination” over the digital tax, and denied that it “aiming at American companies”. Rather, it will be applicable to all digital companies with turnover on their online business of at least €750 million worldwide and €25 million in France - whatever their original nationality.

He said: “These companies [currently] pay little to no tax, which is not acceptable.”

Mr Le Maire said that the French decision was only a “transitory” move, taken pending a wider decision at the OCDE, and as an incentive to “accelerate” the decision. He said: “The first point I want to make very clear to our American friends, is that we are not targeting specifically American companies.

It is hoped that an agreement will be struck during the next G7 summit, in Biarritz, from August 24-26. In July, finance ministers from the G7 countries met in Chantilly, and came to an early consensus on “the fiscal challenges posed by the digital economy”, Mr Le Maire said.

France is not the only country to move forward on the issue of digital giant taxation without a European-wide agreement.

Spain and the UK have both announced their own version of the GAFA tax, while Italy has also stated plans to do the same should European negotiations continue to drag.

Worldwide, other countries have begun to impose significant taxes on the digital giants, most notably India and Singapore.

Yet, White House spokesman Judd Deere said: “[Washington] is extremely disappointed by the French decision to impose a tax on digital services, to the detriment of American businesses and workers.”

He added that federal services were “closely examining all political avenues” available for possible retaliation.

Mr Le Maire: Wine and tech “should not mix”

At the same press conference yesterday, Mr Le Maire again called for the tech tax, and taxes on French wine imports, to be considered as separate issues.

He said: “We should not mix these two subjects. Over the past 10 years, there has been a very significant rise in the imports of American wine in the European Union - around 30%.”

The minister also said he had heard “the worries of French winemakers” after President’s Trump’s words.

It is the third time in less than a year that Mr Trump has made some kind of threat towards French wine.

He said: “It is always extremely damaging for us to be taken as hostages. The American market is an important market for Bourgogne - it is 25% of its exports. That represents almost 20 million bottles exported every year...it is the biggest export market for us, ahead of Britain and Japan.

“What is interesting is that globally, all of the big producer regions - European or American - are fighting to not be taken hostage one way or another. We must remember that in Spring, President Trump falsely said that France was taxing all American wine too much. But this taxation system was European, not French.