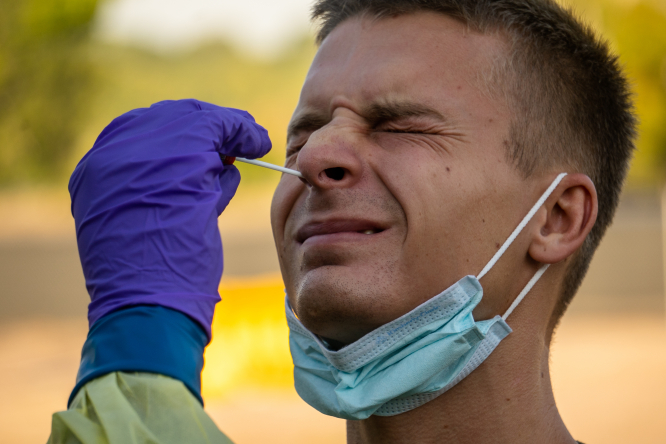 The number of people per 100,000 with Covid-19 has dropped in France in the past week but the number of deaths continues to rise
By Connexion journalist

France’s Covid-19 situation is beginning to stabilise and the number of positive cases per 100,000 citizens is dropping almost everywhere, Professor François-René Pruvot, president of the medical commission of the Lille university hospital, has said.

He said that he hoped to see a drop in the number of admissions to intensive care units for Covid-related reasons within the next two weeks.

“The incidence rate per 100,000 inhabitants is falling almost everywhere. Perhaps a little less in the Ile-de-France, but in most regions, this rate is falling,” he said in an interview with Franceinfo.

Santé Publique France, a public health agency, stated in its April 15 Covid-19 weekly update that the national incidence rate is stable, having fallen by 0.6% compared to the previous week.

The incidence rate is the number of people out of 100,000 who test positive for Covid-19. It is currently at 376 nationally. France’s alert level threshold is anything over 50.

The below table shows the evolution of France’s Covid-19 cases.

“In week 14 (from April 5 to 11 2021), the epidemiological indicators remained at a very high level, with a stabilisation of the majority of indicators.

“A slowdown of the viral circulation is seen, in particular in the departments where reinforced restriction measures had been implemented on March 20 and 27, 2021.

“Nevertheless, hospital tension continues throughout metropolitan France and mortality is still on the rise, an expected development due to the intensity of the epidemic in recent weeks.”

The below table shows the evolution of patients in intensive care units due to Covid-19 in France.

Prof Pruvot said that the number of people being admitted to intensive care units was beginning to stabilise - it increased 3% from last week.

“The problem is that patients have a slightly higher average length of stay - patients who are a little younger and more seriously ill.

“Adding new patients, even in small numbers, increases the total number. We still hope to see a drop in the next two weeks or so.”

He said that hospitals in France were “saturated” but not yet “overwhelmed”.

Santé Publique France noted that for the past four weeks, the 75+ age group has the lowest incidence rate, even if it remains high.