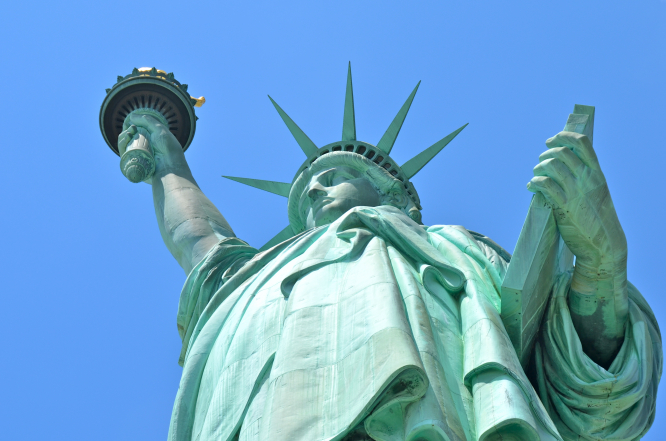 Standing at 2.83 metres tall, the statue is a replica of the original 93-metre version in all but size Pic: Victoria Lipov / Shutterstock

France is to send a new Statue of Liberty to the US, 135 years after the first iconic sculpture was sent to New York City in 1886.

The new statue will “pay homage to all those who enabled the installation of the first Statue of Liberty, and those who have fought for what she represents all over the world”. It will also act as a symbol of renewed Franco-US relations.

Standing at 2.83 metres tall, the statue is a replica of the original 93-metre version in all but size.

It will begin its journey to the US on June 7, leaving the Port of Le Havre on board a Tosca container ship flying a French ensign (flag), after a ceremonial send-off in Paris a few days earlier. The project has been privately funded.

The new Lady Liberty will arrive in New York City first to coincide with Independence Day on July 4.

The statue will then continue to Washington DC to be installed in the gardens of the French Ambassador to the US, where it will be visible “for all to see from the street”, and look towards the original sculpture.

The plan is for it to remain in place for ten years, on an agreed loan from the Quai d'Orsay Conservatoire.

Shipping company CMA-CGM is tasked with ensuring the new model arrives in perfect condition, and has created a made-to-measure Plexiglass case for the journey.

Diplomat Philippe Étienne told le Journal du Dimanche: “The idea of this new voyage came out of a meeting in July 2019.

“I knew that I would soon become the new Ambassador to the US, and I was still the President’s assistant. This evening, I was at a G7 presidential dinner about education, and I spoke with Olivier Faron.”

Mr Faron is a director at the Conservatoire national des arts et métiers, who was considering new ways to spread the value of French heritage abroad. The conversation soon turned to the Statue of Liberty.

Mr Étienne said: “We wanted to retie the thread of this Franco-US history.”

The first Statue of Liberty was installed in 1886 – ten years after originally planned – and was given to the US by France to celebrate 100 years of US independence.

It was created by architect Eugène Viollet-le-Duc (who designed the now-fallen spire of the Notre-Dame Cathedral in Paris); imagined by engineer Gustave Eiffel (of the famous Tower of the same name); and sculpted by artist Frédéric Auguste Bartholdi.

It was assembled out of 300 bronze plaques on-site. An original, miniature version of the statue is displayed at the Conservatoire national des arts et métiers in Paris.

It now stands on Ellis Island, clearly visible from New York City and beyond; and is recognised as an iconic symbol of liberty the world over.