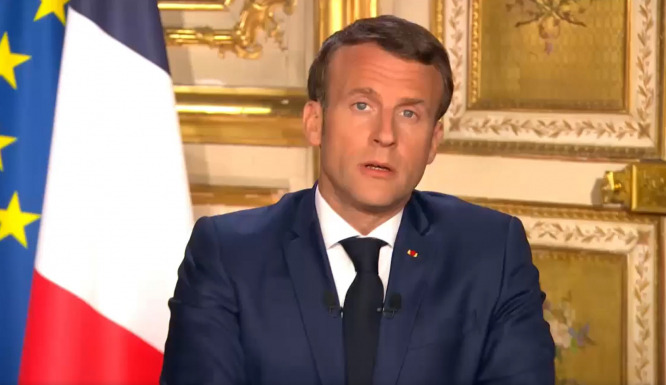 Specific aid will be granted to businesses in the tourism, culture, hospitality and events sectors. Families on the lowest incomes that have been most affected by the crisis will also receive additional help, he said.

He said: “The measures of short-term unemployment [chômage partiel] and financing for businesses will be extended and reinforced. They are unprecedented, and have already protected eight million workers and many of our businesses.

“For tradespeople, independent business owners and entrepreneurs, these solidarity funds offer something of an initial response; but I see your anxiety, I have heard it, and read about it; the charges that continue to come, the bills, the rent, loan repayments…

“That is why I have asked the government to greatly increase the help, and to simplify it, to allow you to overcome this period.”

Mr Macron also asked that banks and the financial sector help to “shoulder the burden”, and to “move [payment] deadlines much more than they have”. “I will be paying attention [to this]”, said the president.

Mr Macron announced the extra aid after confirming that confinement will remain in place in France until at least May 11 when the first deconfinement measures will begin.

These are likely to include the re-opening of schools; but many businesses including bars, restaurants, hotels, tourism spots, theatres, cinemas and other cultural sites will remain closed.

These businesses will receive “a specific plan [of help]”, Mr Macron said, with “cancellation of charges and specific aid to be put in place”.

The poorest families and 'the common good'

The president also explained that more help would be given to individual households of low-income families that are bearing the brunt of the crisis.

He said: “For the poorest families, these weeks are also difficult. I have asked the government to go further and to provide exceptional assistance without delay to the most disadvantaged families with children, to enable them to meet their basic needs.

“The most precarious, who are sometimes living far away from their families, especially when they come from overseas, will also be helped.”

The president did not go specify how much aid would be offered, nor specific eligibility conditions, but said that these would be decided and revealed tomorrow Wednesday (April 15) during a cabinet meeting.

Mr Macron also said that the crisis had shown how important workers from the least-well-off families were to the smooth running of society.

He said: “We must remember that our country, today, is being held up by the men and women that our economy so poorly recognises and rewards.”

He listed: "Thanks to our public service workers, health workers, nurses, doctors, carers, paramedics, emergency workers, our military, our pharmacists, they have given - at the frontline - all their energy to save lives and care. They have stayed the course.

"Secondly, our farmers, our teachers, drivers, delivery workers, retail staff, security staff, cleaners, journalists, social workers, mayors and local government...so many, helped by so many of the French people. All of them have allowed life to continue."

He also thanked the public for respecting the confinement measures, and said that this was helping the epidemic to recede.

Quoting from the first article of the French 1789 Declaration of the Rights of Man and of the Citizen (Déclaration des Droits de l'Homme et du Citoyen de 1789), he said: “Social distinctions can be founded only on the common good.

“The French wrote these words more than 200 years ago. Today, we must take up the torch and give full force to this principle.”