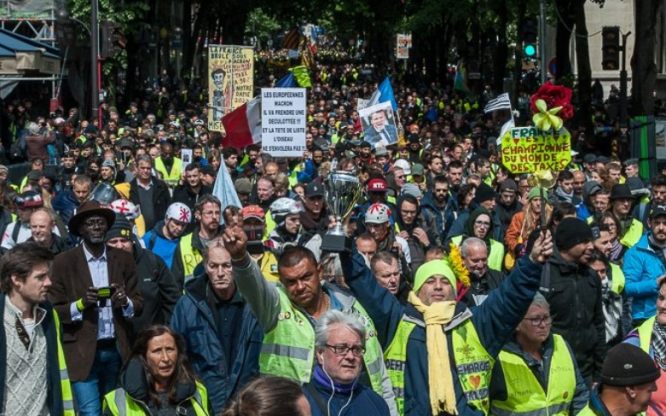 An open letter, published online by Libération and on its own website, entitled: “Gilets jaunes: We are not fooled!”, showed support for the “movement, which [those in] power are seeking to discredit and severely reprimand, even though the most threatening violence is [actually] economic and social.”

It added: “We see the over-used strings [being pulled] to discredit the gilets jaunes, who are described as anti-ecologists, extremists, racists, vandals...but this isn’t sticking, this story does not align with reality, even if the media and government spokespeople would like us to believe it.”

The signatories - calling themselves the 'Yellow Submarine Collective' , and including actors, writers, musicians and more - condemned the “repression, which is getting worse every week”.

They said: “Nothing justifies a legislative ‘anti-vandal’ arsenal, which is flouting our fundamental freedoms."

They continued: “[We] demand some essential things: more direct democracy, more social and fiscal justice, radical measures in the face of environmental emergency. We will continue to complain, louder, more often, more united.”

The letter concluded: “The ‘gilets jaunes’ are us [and we are] absolutely affected by this historic mobilisation.”

Support for the movement comes as the protests themselves have seen a drop in numbers for three consecutive weekends.

According to official figures from the interior minister - which are always disputed by organisers - there were 18,900 protesters out in force across France this Saturday May 4, including 1,460 in Paris.

Yet, the drop in numbers comes in the same week as protests held on May 1, which saw between 150,000-300,000 people join the traditional union marches held on that day.

On Saturday May 4, there were some notable clashes in Toulouse and other major cities, as well as in Roche-sur-Yon, in the Vendée.

Despite authorities having banned all protests in the latter town centre, around 500-700 people showed up anyway, prompting conflict with law enforcement, and the injury of five protesters.