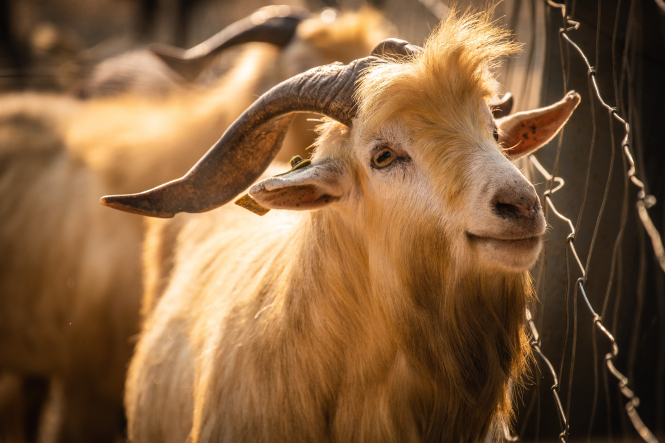 The question of what to do with a Christmas tree after the festivities are over is not always straightforward.

Some towns in France offer dedicated recycling centres, as do some garden centres. And old Christmas trees left in the street are also a common sight at this time of year, even though disposing of a tree in this way is actually illegal and can lead to a fine of €35-€180.

But farmers across France are stepping in with a new solution – using old Christmas trees as a tasty snack to feed sheep and goats.

In the department of Aisne in northern France, Olivia Brelut looks after four sheep. She posted a Facebook message asking for old trees on December 28, writing: “We will take your Christmas trees for our sheep. The needles are filled with vitamins and trace elements!"

The next day, around 10 Christmas trees had already arrived at her farm.

Ms Brelut told news source France 3: “I didn’t think my post would be read and shared so much. I’ve received calls from all over France! It feels like a wonderful surge of solidarity.

“The mairie has even supported us by offering three collection points in our commune.”

A winter treat for goats

In Indre-et-Loire, at La Ferme des croq’epines, Céline Durchon’s goats have also been enjoying the festive snack. She told news source France 3: “They really enjoy [the Christmas trees]. It’s resinous, it gives them something green to eat, it smells good. It’s a little winter treat.

“Goats love a huge variety of plants. There is no problem giving them resinous plants, and in the middle of winter it gives them green food and vitamins.”

And, in Saint-Malo on the west coast, the farm Trotteur de Coeur has also had an influx of donations. Farmer Mélanie Guérin is now organising cold storage to house all the trees she anticipates receiving in January, to continue feeding her ten goats in February.

She told news source France Bleu: “When I offer [the goats] one, the trees never stay whole for long.”

However, there are some specifications for donations. She said: “We accept nordmans and spruces, but not thujas because it is toxic for the goats. Obviously, we can’t take trees with artificial snow, and all decorations need to be removed.”

System could be enlarged next year

In the Alpes-Maritimes, farming authority la Chambre Agriculture is now investigating whether a coordinated approach to this form of Christmas tree recycling could be implemented in the department next year.

President Michael Dessus told France 3: “At the moment it’s individuals taking the initiative and it is a very good idea. In the Alpes-Maritimes, there are 160 goat and sheep farmers. We would need to put in place a collection and delivery system [for next year]."

He added that such a system would not be possible this year due to Storm Alex, which caused flash floods and widespread damage in the department in October 2020. He said that following the storm: “We have already had a lot to do for our animal farmers and their herds. More than 400 tonnes of hay were delivered to compensate for the loss of stock for animals, and all the roads are not yet re-established.

“But for next year it’s a great idea. Why not?”

French nursery looks after Christmas trees for next year

French town cuts its own Christmas trees to help nature