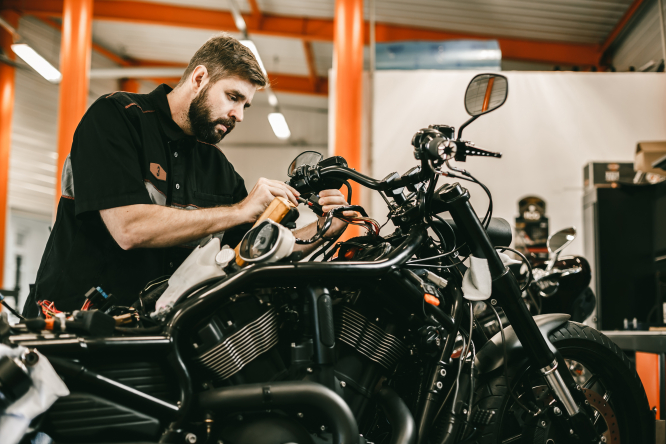 [Article updated August 12, 2021 at 17:20: the new contrôle technique requirement has since been suspended by the French government.]

Motorbike and moped riders in France will from January 1, 2023 be required to put their vehicles through a contrôle technique.

This had been announced by the French Transport Ministry in June, but was only confirmed yesterday (August 11) in a notice published in the government’s Journal officiel.

This states that the requirement for a contrôle technique [the equivalent of a British MOT] will apply to all “motor vehicles on two or three wheels,” as well as “motorised quadricycles”.

The first of these roadworthiness tests must occur in the six months preceding the date marking four years since the vehicle was first ridden or driven.

After that, the contrôles should take place every two years, or before the vehicle is sold on to a new owner.

Meanwhile, motorbikes and scooters registered in 2021 can wait until 2025.

The owners of classic motorbikes and scooters will need to put their vehicles through a contrôle every five years, unless they are transferred to a new owner.

The price of the test is as yet unknown, although in a 2015 interview, the then government delegate for road safety, Emmanuel Barbe, said that they may cost between €50 and €70.

There are thought to be approximately 2.5 million motorcyclists riding nearly four million two-wheeled vehicles - including motorbikes and mopeds - in France.

The result of a European directive

An EU directive published in 2014 detailed a contrôle technique stipulation for two- and three-wheeled vehicles with a cylinder larger than 125cm3, with the aim of combating air pollution and reducing the risk of road accidents.

This was due to be adopted by all member states on January 1, 2022, with the European Parliament extending the requirement to all two-wheeled motor vehicles in April of this year.

With its 2023 start date, France will be implementing the contrôle technique policy one year later than its fellow EU member states.

The EU directive prompted protests from thousands of motorbike riders in France, with biker group, Fédération française des motards en colère (FFMC) arguing that the mechanical state of these vehicles does not increase the likelihood of their being involved in an accident.

Reacting to yesterday’s government announcement in a statement, the FFMC reiterated its opposition to the new law, insisting on “the pointlessness of a contrôle technique for two- and three-wheeled vehicles, a view which is supported by a ‘Motorcycle Accidents In-Depth Study’.

“This report shows that technical failures only represent 0.3% of accidents involving these vehicles, while infrastructural faults such as potholes are much more dangerous for vulnerable road users.

“Repair our roads and leave us to take care of the motorbikes!

“The FFMC continues to say ‘No’ to the contrôle technique and will examine all possible courses of action, whether they be legal or on the ground.”

The federation is inviting motorbike riders to join them in a demonstration against the new rules, which will take place after la rentrée.

You can read the Journal officiel decree in more detail here

May motorbikes weave in and out of traffic?

14 hours ago
5
What income must Britons show for a six-month visitor visa for France?