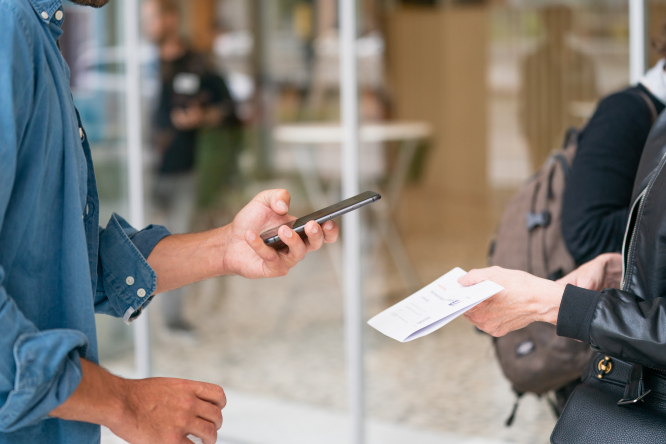 The health pass will be available in digital and hard copy, with information stored in the form of scannable QR codes Pic: @purzlbaum / Claudio Schwarz / Unsplash

The European Commission has said that the French health pass, and other passes developed by member states, can be used for travel within Europe from June 17.

The pass will also be necessary in France from June 9 for attending trade fairs and other events with over 1,000 people and from June 30 for attending standing concerts and festivals.

We explain how the health pass will work.

How can I use the health pass for travel?

The health pass will be recognised within France and the European Union.

The European Commission has said that as of June 17, health passes developed by different member states will be recognised, and allow travel between EU countries.

At the European level the pass is referred to as a ‘digital green certificate’.

All vaccines currently authorised in Europe will be recognised, meaning Pfizer, Moderna, AstraZeneca, and Johnson & Johnson.

While the pass will allow travel, in light of new variants individual member states will still be able to choose whether quarantines are necessary for international visitors, even if they have shown a health pass to enter the country.

Do I need the health pass to travel within France?

Health checks are in place for travel to and from Corsica and French overseas territories.

The pass is currently being tested on some Air France and Air Corsica flights flying between Orly airport and Corsica, and on some ferry journeys run by Corsica Linea and La Méridionale between Marseille and Corsica.

From mid-May the pass will also be tested on some flights to overseas territories.

You do not need the health pass to travel within mainland France.

Will the health pass be mandatory?

People will not be obliged to have a health pass. You will be able to travel without it, but having the pass is expected to make travel easier.

In addition, each member state will have the freedom to choose if certain events require a health pass.

For example, in France, the pass will be needed for admittance to events with over 1,000 attendees, standing concerts and festivals.

In other countries the pass may be required for going to restaurants or to access other public spaces.

The pass will not be needed for activities such as going to restaurants in France as this suggestion was rejected by French MPs.

Read more: French MPs vote in favour of Covid health pass for use from June 9

What information will be on the health pass?

The health pass can be used to demonstrate that carriers do not have Covid-19. This can be shown by:

It is possible that people who have immunity as they have already had Covid-19 will be able to add this information to the health pass. This is still under discussion, as it is not known how long immunity lasts for in this case.

How do I get the health pass on my smartphone?

The health pass can be stored on the TousAntiCovid app, which has been downloaded by 15.5 million people.

On the app, the ‘Carnet’ section can hold information about test results and vaccine certificates.

From April 29 people have been able to upload test results onto their smartphones (and then onto the app) using a QR code, and from May 3 for vaccine certificates.

Test results can also be uploaded via patient portal Sidep, using a link received by text.

People vaccinated before May 3 can request a scannable certificate via the TousAntiCovid app from the end of May, or from their GP.

Parents can use the app to store health information for their children.

Who can see the information on the health pass?

On the app results and certificates will be shown in the form of a QR code, with only the first name and surname of the person visible at the top.

This code can be scanned by people in charge of verification which could include airport and border control staff, police, managers of public spaces and managers of large events.

In France a publicly-developed digital reader called TousAntiCovid Verif will be used to scan the codes.

Proof of identity will also need to be shown when the pass is scanned.

Will a non-digital version of the pass be available?

A paper form of the pass will be available for people who either do not have a smartphone or do not wish to digitise their health information.

1 day ago
5
Covid France: Changing rules for testing and quarantine this summer

Did you know that the Cancan started out as a feminist dance?
21 June 2021

Help for replacing an old oil boiler with a heat pump in France?
6 May 2021
More from French news
More from Connexion
Get news, views and information from France
Join the newsletter
Subscribe to The Connexion