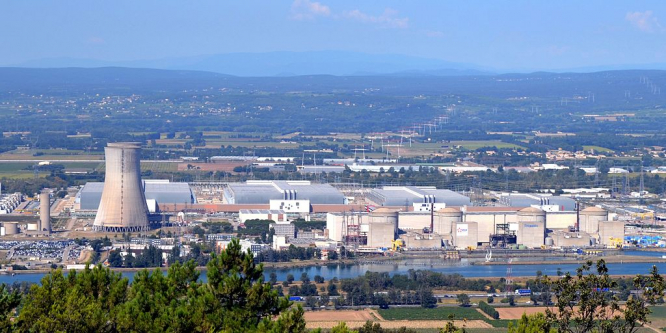 A view of the Tricastin nuclear power station, which is close to the Cruas station, which stopped production following Monday's earthquake
By Connexion journalist

The comments come after an earthquake of 5.4 magnitude hit the Montélimar area (Drôme, Auvergne-Rhône-Alpes), on Monday (November 11), injuring four people - including one seriously - and severely damaging buildings, especially in the neighbouring commune of Teil (Ardèche).

Another quake, with a magnitude of 3.3, was felt in Strasbourg on Tuesday November 12.

Questions have since been asked about the safety of nuclear power stations in the area, after the nuclear reactor in Cruas, around 20 kilometers away from the earthquake epicentre, stopped production following the event.

Ecology minister Brune Poirson sought to reassure residents on Monday (November 11), saying: “All of the follow-up and checking procedures [in Cruas] were activated, and worked perfectly.”

Now, Thierry Charles, general deputy director at the national institute for nuclear safety, l’Institut Régional de Sécurité Nucléaire (IRSN), has spoken to news source 20 Minutes to explain how power stations are built and protected in the event of earthquakes.

He said: “People don’t realise, but the risk of earthquakes is evaluated in France right from the start of construction. For nuclear, we study - in the area - earthquakes that have happened historically, to establish what we call ‘likely maximum earthquake’.

“We have a bank of data across 100 years - since we first knew how to measure earthquakes. Then, we make judgements based on geological data and writing, such as if a priest wrote in 1253 that ‘the church bell was crooked after an earthquake’.”

This data is then used to calculate the maximum likely seismic activity, with extra safety built in: 0.5 is added to the ‘likely maximum’, and other calculations are then brought in - on the vibration of the materials, especially - to determine how the nuclear power station will be built, the expert explained.

Mr Charles said: “That allows us to determine the thickness of the wall, or the quantity of reinforcement needed, for example. If we discover a new geological fault, that will lead us to a new seismic level.”

This level is re-evaluated every 10 years - with the power stations at Bugey (Ain) and Fessenheim (Haut-Rhin) recently having to make changes as a result of this.

The risk of earthquakes is also calculated for other potentially-dangerous sites, such as warehouses containing highly flammable chemicals, often classified as “Seveso” - the same classification as the Lubrizol chemical site that caught fire in Rouen in September.

Mr Charles explained: “Other dangerous sites are regulated on a map of France showing seismic risk, classed from level 1 (low risk) to 4 (high risk). The area near Teil, where the quake hit, is classed as level 3.

“This map then takes into account the risk of the building; the more dangerous the site is considered to be, the more drastic the security measures. We might reinforce floor fittings or make pipes more supple, to avoid them breaking.

“Other sites, those that are not in perceived dangerous areas, have a ‘normal risk’. They are constructed according to specific European norms for seismic zones.”

These norms change over time, depending on events. After the Fukushima accident in Japan in 2011, France reviewed its security measures too.

Mr Charles said: “Since [Fukushima], French facilities have had to analyse a minimum amount of specialised equipment: whatever the result of the seismic survey, we look beyond that for the most important elements.”