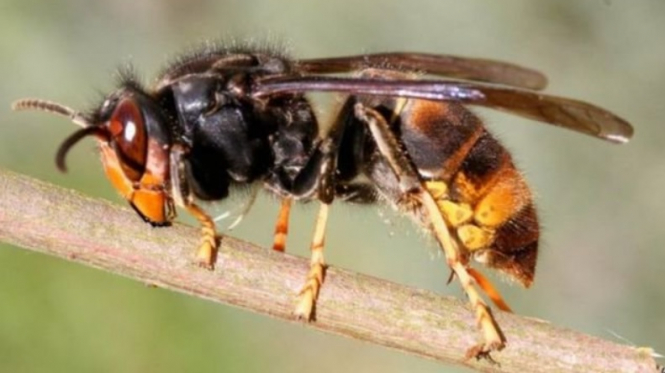 Asian hornets were first seen in France in around 2004, and cause widespread damage bees and beehives. They can also be deadly to people, though only in rare cases and due to multiple stings, usually while people are trying to destroy nests.

The department of the Manche has financed a new €95,000 research programme that will see scientists testing a new kind of trap, using naturally-produced pheromones to repel and attract the insects as needed.

Early work on the project has been described as “very promising”, with researchers even saying the method offers a way to “talk” to the insect and “speak its language” as a means to fight its spread.

Read more: War on wasps and hornets declared in the Dordogne

“The only way to be effective against the Asian hornet is to speak to it. We have to speak in its own language, to tell it to go away, to attract it to a trap.”

The researchers have discovered three molecules that could be effective in fighting the hornet. One pheromone appears to repel the insects, while another draws them in.

Mr Darrouzet said: “The idea is to use [the molecules] to protect the beehives, by establishing a kind of chemical barrier. Tests have been done on beehives in Indre-et-Loire [Centre-Val de Loire]. One pheromone in particular appears to repel them. We will now test this in the Manche.

“All the pheromones are naturally produced by the hornet. We will now need to make them synthetically so that they can be made on an industrial scale.”

Further tests are set to begin in Spring.

The ultimate aim is to establish a method for producing the pheromones at scale, so they can be commercialised into effective anti-hornet products. The aim is that the formula will be defined by 2021, with products going on sale on the wider market by 2022.

Currently, there is no real solution against the Asian hornet. Current traps on the market are often seen to be ineffective, and kill more insects of other kinds that the hornets they are designed to attract.

Mr Darrouzet said: “Food traps are not effective. If we leave out sugar, that trap is competing with all the other sources of sugar that are available in nature.”

Similarly, killing one or two hornets this way does not address the problem of entire nests and colonies elsewhere, researchers said.

Valérie Nouvel, vice president of the Manche departmental environment council, which financed the project, said: “We must find solutions that allow us to protect biodiversity. These new traps must also be good value, if we want them to be used.”

The project is also aiming to research new ways to kill hornet nests and colonies without using insecticides. When used to kill hornets, these can stay in the nests or on vegetation for days afterwards, leaving a covering of poison that is damaging to other insects and animals.

Mr Darrouzet said that people should remove the nests two days after treating them with insecticide, but said that this is “rarely done”, making the nests “environmental bombs”.

Researchers are therefore also investigating more natural methods of killing the hornets in their nests, including finding ways to raise the temperature to 50°C: a deadly level for the insects.

One method currently being trialled includes injecting very hot steam into the nest, which kills the hornets but does not leave any poison behind, meaning the nests do not need to be destroyed after treatment.

Ms Nouvel said the department was looking for companies that could help with said “temperature procedures”, and said: “Now, we need to do tests to establish an intervention process.”

Members of the public are warned to never try to destroy a hornet nest without specialist help, as one nest can contain thousands of hornets, and they can become aggressive when disturbed.

While their sting is about as dangerous as that of a normal European hornet or wasp, some people may be more sensitive than others - and even one sting can be fatal for someone with an allergy to the venom.

Being stung multiple times can be even more dangerous.