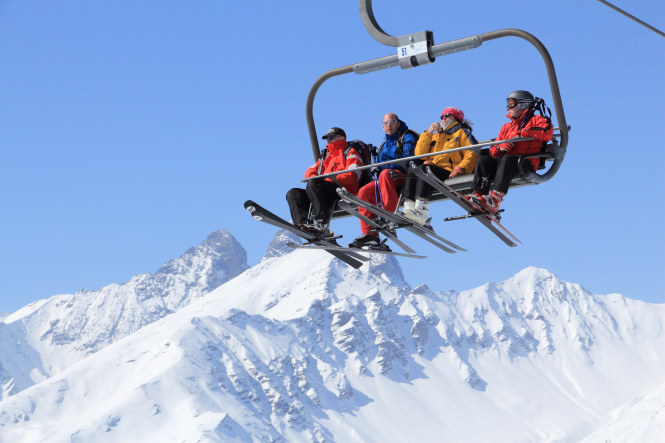 The health pass may not be needed for ski lifts or stations in France this year, but its use has not been ruled out Pic: Tupungato / Shutterstock

The Covid health pass may not be needed when French ski stations open this year if the health situation continues to improve, a minister has said, as he confirmed a €6billion investment in the sector.

It comes after it was previously announced that the health pass could be required for access to ski lifts this year, and one year after all ski lifts were completely closed in France due to the pandemic.

Junior Tourism Minister Jean-Baptiste Lemoyne made the comment during a visit to the mountain commune of Sisteron, Alpes-de-Haute-Provence, this week (October 14).

Mr Lemoyne took the opportunity to launch the slogan: “This winter, we’re open”.

Yet, Mr Lemoyne did not rule out requiring the use of the health pass if the health situation demanded it.

He said: "The conditions were not met last year, because there was no vaccination, no health pass. This summer, we were able to leave many sites and structures open thanks to the health pass, so we should not stop ourselves from using it, if it can help to secure the season.”

Investment in the mountains

The minister also confirmed that €6billion is to be invested in the mountain tourism sector to help it recover from last year’s largely closed season.

The news was cautiously welcomed by mountain professionals and locals.

Béatrice Savornin, mayor of the town of Montclar in the Blanche valley, in Alpes-de-Haute-Provence, told France 3: “We are happy to finally be able to welcome future holidaymakers.

This is an announcement that we were waiting for, but weren’t sure would ever arrive. We are still waiting for some compensation even now.”

Christian André, director of tourist management company Risoul, said: “This is good news, but we are staying alert, given what we saw last year. It was crazy to see the stations open, but the ski lifts closed.”

He added that the sector is “very capable of adapting very quickly to good or bad news”.

Are people booking mountain holidays in France this year?

In a word, yes. Figures from Risoul suggest that confidence is high this year.

Bookings in mountain stations are 15% higher this year than in previous years, and just one in 10 people have taken out extra Covid cancellation insurance, Risoul said.

Mr André said: “People feel reassured with the health pass, they know that they will be able to enjoy [the area], whether the pass is needed or not.”

Smaller stations are hoping they may not require the pass, as they have fewer visitors and resources.

Benoît Cazères, mayor of Selonnet, near the Chabanon station in Alpes-de-Haute-Provence, said: “Whether with the health pass or not, we will adapt  but for us smaller stations, we would prefer to not need it.

“The pass would make things more difficult for smaller stations, compared to the larger ones, who could argue that it’s more reassuring for their customers.”

Yet, some mountain locals say they have had some difficulty in recruiting enough seasonal workers for 2021.

Mr André said: “Most operators have not yet found all of their teams for their events, restaurants, accommodation, or even the ski lifts.”

Ms Savornin added: “A lot of seasonal workers don’t want to get vaccinated. And if the seasonal workers go, the locals of the villages will also go. One job in the mountain creates two in the valley, so it’s paramount to keep this economy going.”