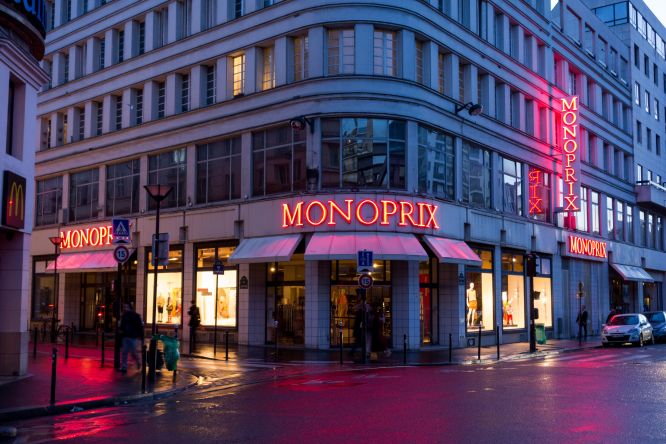 Customers entering Monoprix this week will see posters giving a humorous take on which items are and are not available for purchase due to government restrictions on selling “non-essential” items during confinement.

In early November the government restricted items that supermarkets could sell following claims of unfair competition from small, independent retailers such as bookshops which were forced to close during confinement. Supermarkets could stay open despite selling the same products.

The rules on the supermarket products that are classed essential and non-essential have been amended in the past few weeks. Items such as some children’s clothes and underwear were initially considered non-essential and made unavailable to shoppers, but aisles containing these items have since reopened.

A third celebrating the returned right to sell umbrellas says: “As a commission has just concluded that water makes things wet, at long last we have the right to sell you umbrellas.”

Another sign explained the closure of Amazon lockers in stores which allow customers to pick up deliveries from the online sales platforms. While independent shops and supermarkets have faced restrictions, online platforms have continued to sell non-essential items throughout confinement.

It says: “We didn’t really feel like receiving things that we no longer have the right to sell here.” (On n’avait pas très envie de recevoir ici ce qu’on n’a plus le droit de vendre ici.)

Humour is typically a part of the Monoprix brand, with the packaging on many own-brand products in stores printed with puns and plays on words.

But the satirical signs have caused a stir on social media, with some commentators questioning whether Monoprix has become an “anarchist” brand.

A spokesperson for Monoprix told news source BFM Business: “The group wanted to bring a bit of levity and humour during this morose period by making clients smile and echoing what they may sometimes feel.

“This spirit does not represent a desire to criticise government decisions, which we have applied scrupulously.”