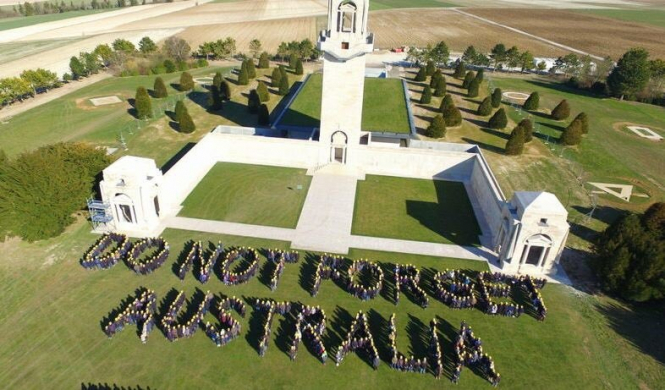 Of the 2,142 soldiers buried at the memorial in Villers-Bretonneux, 779 are Australian - and the town maintains close links with Australia and the State of Victoria
By Connexion journalist

The Victoria school in the town of Villers-Bretonneux (near Amiens, Somme, Hauts-de-France) is taking part in fundraising for Australia, children have been making a banner to hang up in the local Franco-Australian museum, they have been writing solidarity messages to hand to visitors in the museum and they are writing a song in honour of Australia.

The mayor has also called a meeting to discuss how the town can help further, and is expected to announce a call for more fundraising and a local march in support imminently.

The town's links to Australia date back to April 25, 1918, when ANZAC (Australian and New Zealand Army Corps) forces liberated the town from the Germans.

The words “Do not forget Australia” are written on the walls of the school playround, and "N'oublions jamais l'Australie" is on signs in the school. The slogan is often spelled out in front of town’s Australian memorial too.

Every year on April 25, hundreds of Australians gather in the French town to celebrate ANZAC Day, which commemorates both the 1915 battle of Gallipoli, and the 1918 battle of Villers-Bretonneux. Of the 2,142 soldiers buried at the memorial, 779 are Australian.

The memorial also lists the names of more than 11,000 Australian soldiers who died for France over the course of World War One.

In 1918 Australians everywhere spoke in hushed tones with a mix of great pride and great sorry for on this day/night/day in April 1918 more than 1,200 Australian soldiers were killed liberating the town of Villers-Bretonneux from the invader.
"Noublions jamais L'Australie" pic.twitter.com/B2alzNVgUn

The site has now become a symbol of cooperation between the two countries: In 1920, inhabitants of the Australian state of Victoria raised money to rebuild the school, along with the Victorian Department of Education, and to reconstruct parts of the town.

The French town is also twinned with the small, 2,000-inhabitant Australian town of Robinvale, in the north of Victoria, which has so far escaped the flames, according to the Australian Embassy in France.

The Victorian Department of Education helped to rebuild the Villers-Bretonneux school after it was destroyed by war. Previously known as "Ecole de Garcons", it was renamed Victoria College in honour of the work (Photo: Culture Victoria / Cv.vic.gov.au/)

Australia has been ravaged by wildfires for more than four months. So far, 24 people have been killed, more than six million hectares of land have been destroyed, and more than a billion animals - including kangaroos and koalas - have died. Some rare species are even being threatened with extinction, according to a report by wildlife charity WWF and Sydney University.

Alongside the support from Villers-Bretonneux, the Somme department overall is also calling for messages of support from France. Once collected, these messages will be sent to the Australian Embassy, which will distribute them to local people affected by the crisis.

Many other online fundraising platforms have been started, with the Australian Embassy drawing up a list of the best ways inhabitants in France and beyond can help with the firefighting effort.