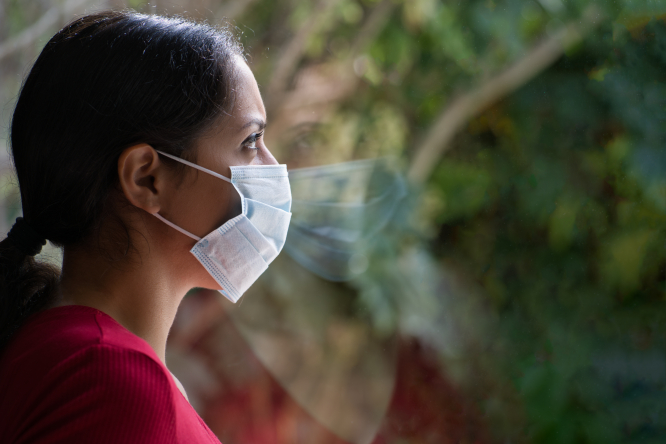 People vaccinated out of the UK are told to self-isolate after coming into contact with a confirmed Covid case Pic: Ripio / Shutterstock

Hundreds of vaccinated people travelling from France to the UK are being told to self-isolate in the UK due to being flagged as a Covid contact case after a flight.

Travellers who are vaccinated in the UK with the same vaccines and who were travelling on the same flights do not need to quarantine.

This is catching many people by surprise as on August 16 the UK government exempted fully vaccinated people from the 10-day self-isolation requirement imposed on the close contacts of a confirmed coronavirus case.

However, Covid isolation regulations for England state that a person is only seen as fully vaccinated for contact tracing purposes if their “course of doses was administered [...] in the United Kingdom.”

This excludes both British people and foreign nationals who have been vaccinated abroad.

In the seven days up to October 6, 2,520 – or 0.8% – of travellers entering the UK from non-red list countries such as France tested positive for Covid through their day two test, according to figures released by NHS Test and Trace.

The planes most commonly used for short-haul flights between EU countries and the UK are variations on the Boeing 737 and the Airbus A320, which normally seat between 150 and 180 passengers.

According to the 0.8% ratio, there could potentially be one or two people on board every flight who are Covid-positive, although the actual number will no doubt fluctuate depending on the country from which the plane departs.

This percentage may increase as the rule on pre-departure Covid tests to enter the UK from non-red countries has been dropped.

It also comes despite the fact that in France, people are most commonly vaccinated with the Pfizer-BioNTech jab, which along with Moderna is thought to be more effective against the Delta variant – which currently accounts for the vast majority of coronavirus cases in England. It is also in spite of the fact that vaccinations done in France are acceptable for purposes of entering the UK from non-red list countries without having to automatically self-isolate.

The government website states that: “Crew should accurately identify passengers located within two seats in each direction [to the side, front and back] of symptomatic passenger / passenger group during the flight to ensure accurate post-flight contact tracing.”

At least 15 passengers will therefore be contacted by NHS Test and Trace. They will be told to quarantine if they were vaccinated abroad.

The Connexion has been contacted by dozens of readers who experienced this issue on trips to England. One reader says she is cancelling her trip for fear that it would happen to her.

Others described the NHS-administered vaccine stipulation as being “absurd” and “discriminatory” towards people living abroad.

Reader Jan Wilson was told to quarantine after arriving in England from France on September 10 to visit her 96-year-old mother, whom she had not seen for 20 months.

“My travelling companion, who had been staying with me in France, was double vaccinated by the NHS; five days after our arrival in the UK we were both contacted by Test and Trace – we presume someone on the flight had tested positive,” she said.

“I was told to self isolate until 10 days after my arrival in the UK, but my companion did not have to. We both took a government-provided PCR test which came back negative.

“I was invited to enter my results on the NHS Covid app which I duly did and it indicated that It was unlikely that I had Covid and only needed to keep self isolating if I had a high temperature!”

Ms Wilson did self-isolate until she received her PCR results, which meant that she had to cancel plans with her mother, who had hardly been out of her home since the start of the pandemic.

“I had planned to catch up with friends in person, but we didn’t manage to rearrange this. I did not have enough time to do everything that I wanted to do so ended up delaying my return to France,” she added.

“This whole episode caused me a lot of unnecessary stress and wasted my time.”

Another reader, who preferred not to be named, said: “I went for the weekend to visit my daughter who is at school in England and was stuck for two weeks: 10 days of self-isolation and then an additional four days where I was not allowed to return to France as I had been in contact with a positive case within the last 14 days.

“I do not have the NHS Covid-19 app and I am sure they contacted me using my locator form as they told me that it was a person on the same flight as me that had tested positive.

“Luckily I was able to stay with family so did not have to pay for extra accommodation. However I am not sure if I will get a refund for my flight that I had to cancel at the last minute: I was at the airport when they called me.

“I have to make this trip regularly and am worried that it may happen again in the future.

“I have also realised that as pre-flight testing is no longer necessary there is the potential that this may happen more often as more Covid-positive travellers may be boarding the flights and only finding that they have the virus from the day two test.”

Another reader Sue, who is resident in France, reported that the exclusion of vaccines administered abroad from the self-isolation has affected her son who is studying in the UK but was vaccinated in France. He was 'pinged' on the NHS Covid-19 app (which is used by not used by tourists).

“He was notified of being a contact case after returning to uni in September, and was told that he must quarantine – despite being fully vaccinated – and quarantine from the date they contacted him, not the date of the actual Covid contact [the difference was six days].”

“My son and his friends have all now deleted the app. Given student life, they are very likely to have regular contact cases and will end up – just like last year – spending most of their time in quarantine.

“The UK rules are daft. Here in France tourists that I have spoken to have easily uploaded their UK Covid vaccination status to the French app, so why can’t the UK do that?

“There is no sense to it. I’m off to a conference in the UK this week and will need a negative Covid test to get into the conference venue despite being fully vaccinated and coming from an area with practically no covid infections. If my jabs are good enough to get me into the UK why are they not good enough for a venue?”

What does the UK government say?

Another of our readers observed that the UK government is aware that this could cause problems for people – despite their being fully vaccinated – but has not taken steps to address the issue.

On July 21, Nadhim Zahawi, then a junior minister for Covid-19 vaccine deployment, stated to the House of Commons that: “From August 16, under-18s and people who are fully vaccinated will no longer need to self-isolate as contacts, given their reduced risk of catching and passing on the disease.

“In terms of UK nationals vaccinated overseas, by the end of [July] they will be able to talk to their GP, go through what vaccine they’ve had and then have [themselves] registered with the NHS as being vaccinated.”

While this measure – which does not appear to have been implemented – would benefit people living in the UK who were for some reason vaccinated abroad, it would not help residents of countries other than the UK, who do not have a GP in the UK in any case.

The Northern Irish government websites state that their contact tracing systems class people as fully vaccinated if it has been at least 14 days since they completed a full course of an “MHRA-approved vaccine.”

The Connexion has contacted the Northern Irish government to determine whether this applies to approved vaccines administered outside the UK.

We have not yet received a definitive answer.