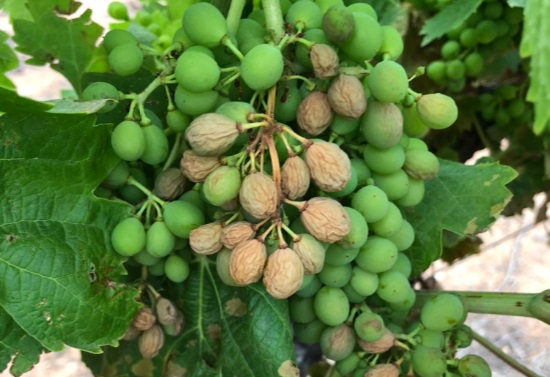 The grapes on the vine look as though they have been "burned with a blowtorch", winemakers said
By Connexion journalist

The departments of the Gard and the Hérault have been particularly affected, with locals saying the grapes appear to have been “burned with a blowtorch”. The area was placed on Météo France red alert for the heatwave (canicule) this week. Temperatures reached over 45°C in some places.

Winemaker and president of the Hérault chamber of commerce, Jérôme Despey, said: “Temperatures reached such levels that some vines appear to have been blowtorched; literally grilled...grapes were burned, and the leaves dried out.”

In a tweet, Mr Despey added that he intended to “activate the emergency unit” at the departmental chamber of agriculture, to get a clearer picture of the damage as soon as possible.

He added: “Vines usually resist heat, but with the levels reached on Friday, winemaking is paying a large price. This is something that I have never lived through. I have been a winemaker for 30 years. I have never seen a vine burned by a heatwave like this; it’s impressive.”

Winemakers in Villeveyrac, Fabrègues and the Pic Saint-Loup area were most affected, he said, including very old “ancestral” vines, such as the Carignan.

Mr Despey also acknowledged that small wildfires across the Gard had also wreaked havoc for several farmers and winemakers in the past few days.