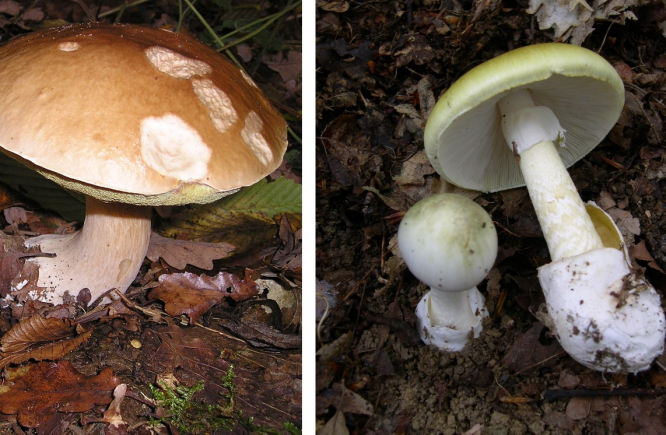 The trio fatally confused the cep (or penny bun), left; with the amanita phalloides (death cap), right
By Connexion journalist

A couple and a member of their family went foraging for mushrooms, and picked what they believed to be ceps (known in French as "bolets"; also known as porcini or penny bun bolete mushrooms).

The mushrooms were in fact amanita phalloides (also known as the “death cap”), which are extremely poisonous. Just half of one can be enough to kill a human, and the toxicity is not reduced by cooking, freezing, or drying.

The body of the 49-year-old woman was discovered by her husband, three days after the trio ate the mushrooms. The woman, the man, and his sister - who had been staying with the couple - had all been very ill since eating the fungi.

The husband and sister called the emergency services, who confirmed the woman’s death, and took the pair to the Faye-l’Abesse hospital in Deux-Sèvres.

They were then taken to the Anti-Poison Centre at the Tours CHU (hospital), and have now recovered.

An inquiry into “cause of death” has now been opened, and an autopsy is expected.

According to early reports, the trio had been foraging for mushrooms, and consumed what they believed to be edible ceps the same day. They became very ill with violent vomiting and digestive pain several hours later, and for two days afterwards.

Death cap mushrooms are considred to be particularly dangerous, not only for their toxicity, but also because they can appear very similar to edible varieties, and usually smell and taste pleasant.

They can cause gastrointestinal problems within hours of eating, which, if left untreated, can cause heart issues and dehydration; and damage the liver, leading to problems including jaundice, liver failure, kidney failure, pancreatic inflammation, and brain bleeds. Death usually follows within six to 16 days.

In a warning published this week, the Agence Régionale de Santé (ARS) said that people “in even the slightest doubt” about the kind of mushrooms they have picked, should “check with a specialist, pharmacist or mycology centre” before eating.

In France, most pharmacists can check your foraged mushrooms to ensure that they are safe to eat.

Mushroom poisonings on the rise

National health safety agency L'Agence Nationale de Sécurité Sanitaire (Anses) said last week that it had seen a “steep rise” in the number of reported mushroom poisonings in just two weeks of October this year, with 493 cases (including one very severe case).

This is compared to between four and 90 cases reported per week in the three months prior.

The ARS said that this was partly due to “favourable weather conditions” in summer and autumn, which had both increased the number of mushrooms available, and had prompted more people to forage.

Symptoms of mushroom poisoning usually appear within 12 hours of eating the fungi, the ARS and Anses warned, and said that “the state of the poisoned person can worsen quickly”.

People who believe they have been poisoned by a mushroom should seek treatment from a doctor, pharmacist or anti-poison centre immediately, and not wait to see if the symptoms “improve”, the agencies said.