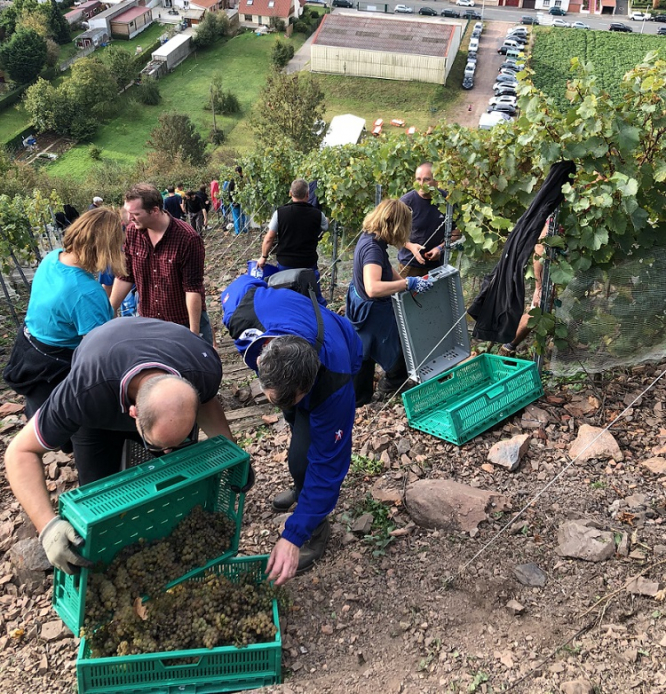 Pickers at work at the ‘pit’ vineyard
By Connexion journalist

It is the first commercial wine produced in Pas-de-Calais and only a few merchants have so far been able to get hold of bottles of the punningly-named Charbonnay, which sells for €50-€60 a bottle.

As its name suggests, the wine is made from Chardonnay grapes – charbon is the French word for coal.

Olivier Pucek (pictured left), a vineyard owner who planted the first vines on the side of Haillicourt’s former slag heap, where mining waste was dumped, said: “It is a great pleasure to finally see it in shops. What is even better is to taste it and realise we have made a very good wine.

“In blind tastings, it compares well with white burgundies in the same price range.”

The wine has been described as highly perfumed and buttery

Mr Pucek has lived in the Charente department for 30 years but grew up near Haillicourt and had always dreamed of planting a vineyard on the spoil heaps.

“They dominate the area and I just thought it was a good idea,” he said.

The heaps – terrils in French – are composed of black soil, slate and schist-type rocks.

Left on their own, they develop a unique flora of drought-resistant plants, many of which are usually found in the south. Most have a pyramid shape, and some can be seen from Eurostar trains on their way to and from London.

“Having the dark soil is an advantage as it heats up more,” he said.

“We chose the middle because planting higher makes things harder without any advantage and going lower means there is the risk of too much frost. A striking thing was seeing how little disease there is in the vineyard.”

That is attributed to the vines being planted in rows, perpendicular to the slope, which means there is an almost constant wind from the top of the heap to the bottom, which stops fungal spores settling.

Almost all the work is done by hand as getting tractors up the 18- degree slope is not practical.

The maire of Haillicourt is responsible for the heaps and he gave the vineyard his blessing, with the commune receiving a third of the 800 bottles produced in lieu of rent.Others, though, including Mr Pucek’s family, were less enthusiastic.

“There was a feeling of ‘oh, dear, what is he doing now?’ from some of my family, who were worried that if the venture failed, they would be a laughing stock. But they quickly came round and are proud of me.”

Charbonnay was allowed to be put on sale, even though it comes from somewhere which is not a wine region, due to a 20-year battle by a group of friends.

They had small private vineyards which, provided they did not exceed 1,000m², allow them to make wine for their own use but not to sell any surplus commercially.

After 20 years fighting bureau-cracy, and complaints from champagne producers, they obtained an Indication Géographique Protégée (IGP) label from the European Union for Ille-de-France region.

Once it was obtained, the French Institut National de l’Origine et de la Qualité (INAO) drew up technical documents for the standards wine must reach, the final step towards allowing commercial sales.

The battle by Ille-de-France has been followed closely by other regions, such as Brittany, where there are few or no commercial vineyards. They too might go down the IGP label route so they can sell their wines.