Be aware: tick bites can cause Lyme disease, says survivor 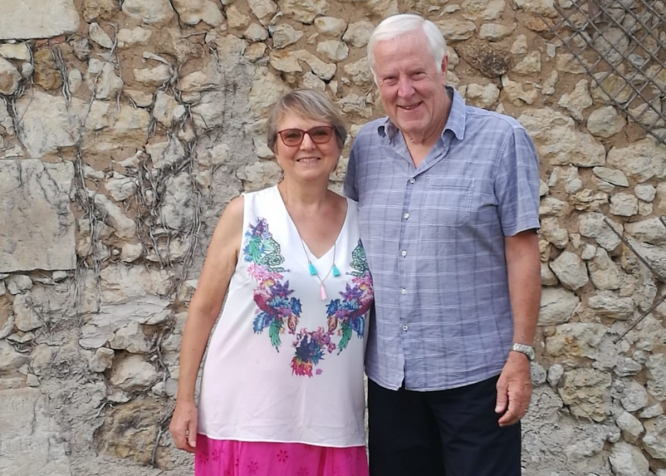 After retiring from her job co-ordinating the Erasmus scheme for Middlesex University, she moved to Segonzac in the Dordogne with her husband John, from Ware, Hertfordshire in 2005. She was in excellent health until two years ago when in August 2018, she suddenly fell ill. “I had dreadful pains in my chest and arm,” she said.

“I thought I was having a heart attack or a stroke. An ECG and blood test at my local A&E revealed that was not the case and I recovered with hefty painkillers. A month later, it happened again but was much worse. My hands would not work and I could hardly walk. Another ECG test showed there were no heart problems. I then saw a neurologist who diagnosed trapped nerves in my elbows and a scoliosis specialist who thought it was a back problem. He wanted to give me a major operation to put rods in my spine."

“First, I had two small operations for my arms, which helped. At last I could do up my own bra, even though my fingers still felt tingly. By January, the discomfort spread to my feet. It was like having wasps in my shoes and my feet felt stiff, as if I was wearing crumpled metal socks. The scoliosis specialist, physio and my GP all agreed it was caused by scoliosis. Eventually, the surgeon decided it was not my back, and sent me back to the neurologist."

“She gave me an all-inclusive blood test. The result was off the scale for antibodies against Lyme disease. This was a huge relief. In October 2019, I had three weeks of daily, heavy-duty antibiotic injections. I can now walk properly without a stick and I have been able to revamp my neglected garden, although I always wear trousers tucked into socks to garden. My feet are still painful and do not function quite as they should, which affects my balance, and I still take painkillers. The neurologist says it will take two years for the nerves to regenerate. However, I am fully active again and regard the treatment as a success."

“I love to garden and walk the dog, but avoid long grass. I did not see the tick that bit me, nor did I have a bite that developed a ring around it, like a bull’s eye, which is said to be a sign you have Lyme disease. I would advise anyone with a tick bite to get medical attention. I was puzzled and frightened by my sudden illness and suffered dreadful pain and disability. Very little attempt seemed to be made to find the cause of my illness and without my husband I do not know how I would have coped.”

Vaccine on the horizon

A French biotech company is on course to develop the world’s first vaccine against Lyme disease, an increasingly common issue here. Valneva, a specialist vaccine firm, has completed the first part of phase 2 testing of a vaccine, which it hopes will be widely available by 2025.

Chief financial officer David Lawrence said: “We’re very pleased. The initial data readout is very positive.” Lyme disease is the fastest- growing and most common tick-borne illness in the northern hemisphere. Symptoms include fatigue, fever and headaches, and are often overlooked, or misinterpreted and misdiagnosed.

In France, there were more than 67,000 cases of the disease in 2018, up from 45,000 the previous year, ministry of health figures show. Mr Lawrence said: “For all the folks who enjoy time in the countryside or parks, and particularly for young people who prefer to go out in shorts, this [vaccine] will make a huge lifestyle difference.”

The French firm has partnered with Pfizer, an American multinational pharmaceutical corporation, which will help drive the next phase of testing, a field study involving around 15,000 people.