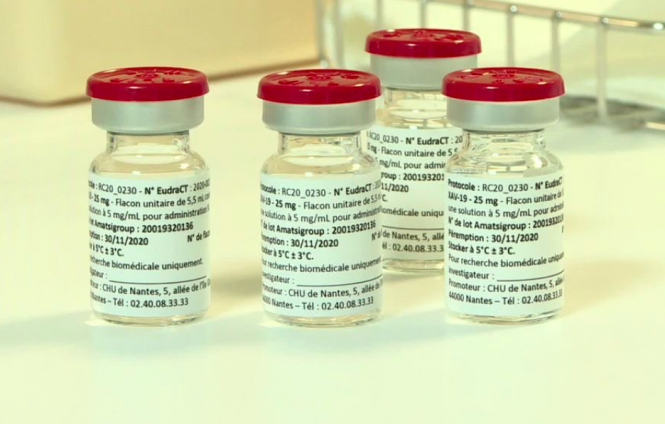 The French government has signed a contract with a medical laboratory in Nantes to reserve 30,000 doses of a new Covid-19 treatment, designed to stop patients becoming seriously ill.

The treatment, called Xav-19 is a ‘polyclonal antibody’ which attacks the virus in multiple ways and which the makers believe to be more effective than American ‘monoclonal’ treatments currently being given to high-risk patients showing early signs of the disease.

It would be used for people who have gone into hospital because they are beginning to develop secondary symptoms to prevent them getting worse and going into intensive care.

It has been shown to work with the new variants.

Laboratory Xenothera says the final results of human clinical trials are expected in the summer followed by a hoped-for authorisation by the Agence nationale de sécurité du médicament et des produits de santé (ANSM) so that it could be available to French patients by the end of this summer.

The initial findings show the treatment to be safe and not to have serious side effects.

The laboratory’s president, Dr Odile Duvaux, said the contract with the French government means they can now start production of the first batch.

“I am delighted with the favourable response from the Health Ministry to our proposition to reserve the first production of our treatment for French patients,” she said. “This contract also shows it is possible to undertake new initiatives in France.”

The contract shows the government’s confidence in the treatment, but it would not have to pay for the doses if it does not actually receive authorisation for use.

In December Dr Duvaux told The Connexion she was disappointed the government had taken so long to back the treatment.

She said testing was delayed because the government had prioritised developing vaccines to fight the epidemic.

“[France] could have been the first in the world to have an antibody treatment against SARS-CoV-2. In March 2020, we were ready: We had prepared a treatment for previous coronavirus outbreaks and our technology had been tested on patients.”

Our Covid-19 treatment was ready by red tape stopped us

Franglais ou Frenglish? The history of French resistance to English
15 June 2021
More from Health
More from Connexion
Get news, views and information from France
Join the newsletter
Subscribe to The Connexion