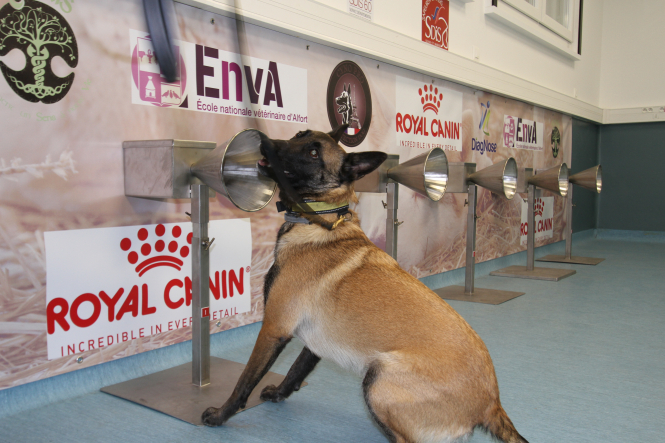 Sniffer dogs could be deployed to test for Covid-19 within weeks if the government gives the go-ahead, according to a veterinary professor. Trained animals can be taught to respond to sweat samples from infected people to a 94% accuracy rate in as little as two weeks, Professor Dominique Grandjean, of the Ecole Nationale Vétérinaire d’Alfort, told Connexion.

“We have had the idea of testing using dogs, developed a proof of concept, done the experiments, and it works,” he said. “It is now up to the government to decide if it wants to take it further.” Prof Grandjean said many in the medical profession had been sceptical about the idea but his multinational and multidisciplinary research group had pressed on. “On his visit to Lebanon in August, President Macron was shown a demonstration and was impressed,” he said. “It was after that that we were contacted by the government for more information.”

But a ministry of health spokeswoman said there were no definitive plans as yet to use dogs to test for Covid. “It is an experimental programme, and will need to be verified by our experts,” she said. In a follow up email she pointed out that a scheme to use dogs to test for cancers in France had still not been approved after several years, and was in a test stage looking at reliability, standardisation and the ability to put in place appropriate infrastructure and organisation for implementation.

But trained police or customs service sniffer dogs, used for explosive or firearm detection or finding illegal drugs, and search-and-rescue or cadaver dogs from fire brigade could be trained to react to Covid-19 in weeks, Prof Grandjean said. “You need to have good control samples to train the dogs with, and that will involve people like us providing them,” he said.

“In the civilian population, there are dog trainers who are already regulated to train dogs to look for explosives and they could train dogs for Covid-19 detection, and train other dog handlers in what to do. I can imagine dogs being used by, for example, sports federations, where football players or rugby players have to have several tests a week, as well as airports or train stations.” Military or customs dogs could also be trained and deployed rapidly if there was the will to do so.

Germany adds Paris and (some of) south France to risk list

It normally takes between four and six months for a so-called “green” dog, which has not been trained as a sniffer, to be trained from scratch, so building up a population of several hundred trained dogs could take time. Sniffer dogs are already used in Lebanon and in the UAE, while a number of other countries, including Australia and Brazil, are considering using them. Because around 11% of the population are very afraid of dogs, and because some people refuse to allow dogs to touch them for cultural
reasons, it is unlikely we will see dogs walking down a line of people in airports, Prof Grandjean said.

Instead, cotton pads placed under armpits for as little as a minute, or even traces left by someone putting on and taking off a T-shirt, can be used as samples for the dogs to sniff. The average detection rate of 94% is comparable to other testing methods, and there have been cases where dogs were able to detect the disease at such an early stage that conventional tests would have missed it, he said.

“At the moment, when a dog detects coronavirus on a person, it would be the same as if they test positive through conventional tests – they are advised to self-isolate for at least 10 days,” he said. Following the results of the tests and related studies at the University Hospital of Strasbourg, using air samples gathered using so-called “air sponges”, the Académie Vétérinaire de France and the Académie Nationale de Médecine both issued statements calling for research to continue.

At the university hospital of Strasbourg, a team led by Prof Philippe Choquet developed a way of making safe laboratory samples of the smell of the breath of people with Covid-19. They will then be used to train dogs to detect the samples. This will reduce the risk to dog handlers and the animals themselves – although dogs have proved resistant to the disease.

Prof Choquet said “We have shown that we can do it in the laboratory, and now we are at the stage where we are waiting for approval for tests to be done using samples from people in hospital who are known to have the Covid-19 virus to prove that trained dogs can detect the disease.” He said the method, if it works as well in the real world as tests suggest, could be used by having everyone on an aeroplane, for example, give samples by breathing through a special mask or into a tube.

All the samples would be gathered together in a bag. If a sniffer dog identifies the bag as positive, individuals in the group will be tested one by one. “The dog’s sense of smell is so strong that they can distinguish one positive breath sample in a bag easily,” he said. Prof Grandjean said his department had received no extra funding for the Covid 19 research. At Strasbourg, Prof Choquet’s team was able to continue its research only thanks to a donation from the hospital’s foundation. Prof Grandjean said: “There needs to be a political decision to continue with the dog detection and, if so, the government needs to put it in place. We have done our bit and proved it works. But we are scientists, and not public health administrators.”