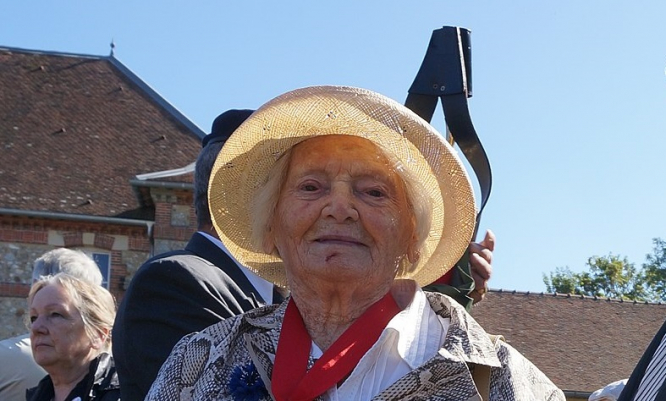 A Resistance hero who helped Jews escape occupied France, survived incarceration at a Nazi concentration camp and went on to deliver repeated messages of peace and reconciliation has died, aged 103.

Yvette Lundy, the youngest of seven children from a farming family in the champagne-growing region around Epernay, was a teacher during the Occupation. She was also a member of the Resistance network known as the Possum Escape Line.

Between 1940 and 1944, she supplied fake papers to Jews, men fleeing the Nazis' forced labour programme in Germany, and escaped prisoners of war, who hid at her brother Georges' farm.

She was captured, aged 28, by the Gestapo, and taken to the notorious Ravensbrück camp, not far from Berlin, where she was incarcerated for nearly a year before being assigned to a slave labour unit near Weimar - which was liberated by the Russian army in April 1945.

After the war, from 1959, she spoke about her experiences to thousands of students to spread a message of reconciliation and tolerance through her work with the concours national de la Résistance.

"Still today, I think of the camp at one point each day ... often at night before I fall asleep," she told AFP in 2017, when she was made a Grand Officer of the Legion d'Honneur.

At the ceremony, she said: "This is a very high decoration. But when we started the Resistance, it was not for a decoration, it was for an ideal, and this decoration is the flower of an ideal."

Announcing the sad news on social media, Mayor of Epernay Franck Leroy said Ms Lundy "represented the honour of France during the darkest hours of our history".

He said: "Yvette was the grande dame of Epernay, even if she would not have liked to be called that at all, given her career as a resistance fighter, a deportee and her incredible investment in the service of the duty of memory."