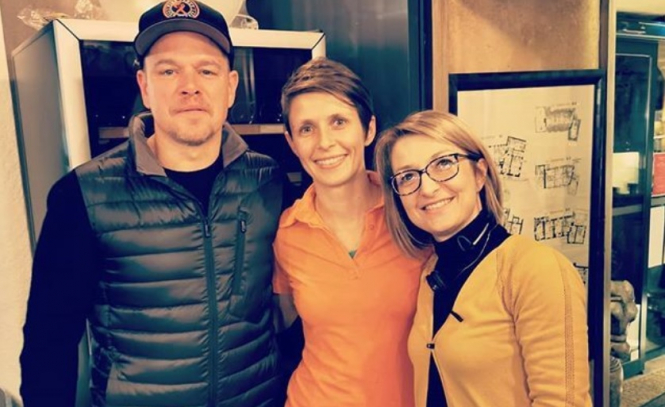 The team of 800 technicians and 800 actors are filming The Last Duel in the Nouvelle-Aquitaine town, including at the Château de Beynac. They have also been based in the 15,000m2 warehouses of tobacco company France Tabac.

This is the biggest film production to have taken place in the town, which has previously been the site of movies such as Les Visiteurs 2 and Jeanne d’Arc.

Set for release in 2021, the movie is about “the last duel” to have been organised in France, said to have been between the Carrouges Knight and a squire, in the year 1386.

With its medieval cathedral and history dating back centuries, Sarlat is known as one of the best-preserved towns - of 14th-century style - in France. Many of its historic sites have been restored, and the centre is largely car-free.

It is currently on the list for future nomination as a UNESCO World Heritage site.

Sarlat has a well-preserved history (Photo: Gilbert Bochenek / CC BY 3.0)

During their stay, Mr Scott and Mr Damon have been seen dining in local restaurants, while Adam Driver also visited the famous Lascaux Caves without any issues.

Some businesses that have served the celebrities have also reportedly signed confidentiality agreements.

Mayor of Sarlat, Jean-Jacques de Peretti, told local newspaper Ouest France that he was happy to help the actors maintain a sense of privacy. He said: “It is much better for them to be able to walk around peacefully in our town. They really appreciate it.”

Yet, despite their A-list fame, the actors - especially Mr Damon - do appear to have been willing to take photos with fans and meet residents from the local area.

The restaurant La Couleverine posted a tweet thanking Mr Damon for visiting them, with a photo of the actor posing with staff.

Adam Driver is known for his recent roles in Star Wars and Marriage Story, as well as the TV series Girls.