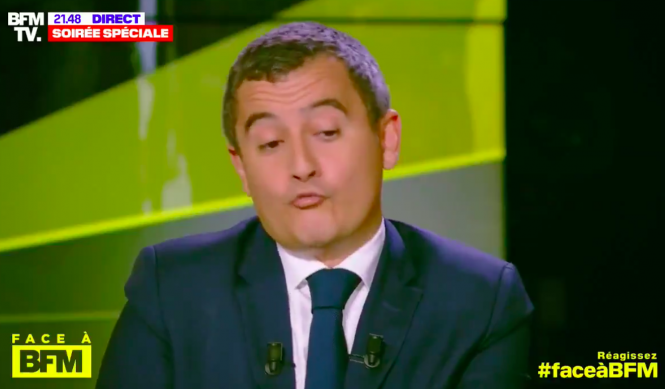 Social media users have reacted with shock and anger to Mr Darmanin's comments.
By Joanna York

French Interior Minister Gérald Darmanin has said he is "shocked" by international food aisles in French supermarkets, in an interview with news channel BFMTV yesterday (October 20).

Mr Darmanin was being interviewed in the wake of the murder of school teacher Saumel Paty, whose killing has been described by President Macron as an “Islamic terrorist attack”.

The President has since promised "immediate action" on Islamic terrorism in France.

Speaking about cultural separatism in France, Mr Darmanin said: “I’ve always been shocked to walk into a supermarket and see an aisle of foods for one community.

“In my opinion, that’s how communities start to form.”

When asked by the interviewer if he wished to see such foods disappear in French supermarkets, Mr Darmanin said that his position as interior minister did not permit him to pass laws that would make that happen.

He said: “I think French capitalism, and global capitalism has a responsibility. If you sell clothes for one community, perhaps you are playing a role in forming communities.”

“I’m simply calling on CEOs to understand that they can contribute to public peace and the fight against separatism.”

He later clarified that he did not wish to see an end to supermarkets selling a range of foods such as “respectable” halal or kosher products.

The comments were not well-received on social media.

Twitter user Johan Jacob posted: “What he’s saying is really dangerous. Will there be ‘republican’ food next?”

Another commentor, Ramsès Kefi, wrote: “He is minister for the interior – so kind of responsible for security. Apart from getting rid of halal Fleury Michon mortadella and Samurai sauce, what is his plan?”

Some questioned whether - according to Mr Darmanin’s logic - Easter chocolate should be removed from secular French supermarkets, and if French people overseas should be banned from buying products such as Camembert, in case they too start forming "communities".

Others were simply shocked by the minister's comments. Ilyes Ramadani tweeted: “I don’t have a jibe, or a tweet, or anything. Just astonishment. This man is the minister for the interior.”