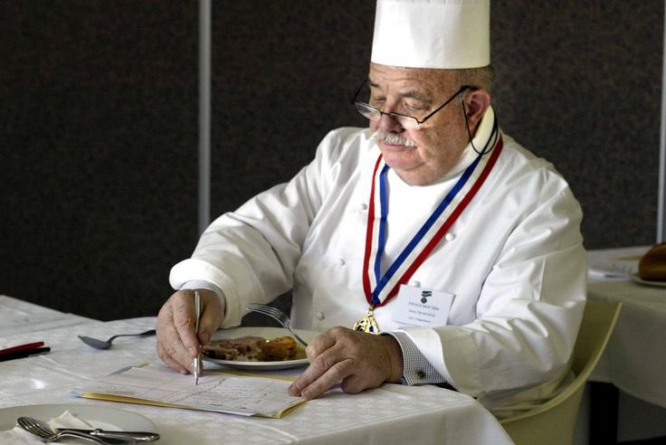 His death on Wednesday September 23 was confirmed by Patrice Laurent, long-time director of Mr Troisgros’ flagship hotel-restaurant in Rouanne, in the Auvergne-Rhône-Alpes, la Maison Troisgros.

Pierre - along with his late brother Jean - is credited with revolutionising French cooking, and for setting up la Maison Troisgros as a highly-respected gastronomic destination.

Mr Laurent confirmed to Agence France-Presse: “Pierre Troisgros died at home in Coteau [near Rouanne] at the beginning of the afternoon. His son Michel and his wife are here and are in shock.”

French MP Eric Ciotti paid tribute to Mr Troisgros, calling him a "giant of gastronomy", and suggesting in a Tweet that he would be interred in the Panthéon, along with other great chefs "who have impacted and spread French cuisine throughout the world" (although the burial arrangements do not appear to have been confirmed at the time of writing).

Mr Troisgros was considered to be one of the “last great French chefs” of his generation, after the deaths of Paul Bocuse - with whom he was close - and Joël Robuchon in 2018.

One of the team from Mr Bocuse’s restaurant in Lyon tweeted: “Our team has a heavy heart this evening. We have just learned of the death of chef Pierre Troisgros, who travelled alongside Mr Paul for 70 years, in an extraordinary friendship.”

Mr Troisgros was born on September 3, 1928, and he and his older brother Jean were brought up by parents who are also in the hospitality industry, as the owners of the Hôtel Moderne in Roanne.

Pierre and Jean trained in some of France’s best Michelin-star restaurants, and themselves achieved their first Michelin star in 1955, for what would become the restaurant Les Frères Troisgros. It was a real family affair, with Pierre in the kitchen, Jean as master saucer, and their father Jean-Baptiste managing the dining room and the wine.

The brothers became known for their creative, innovative and simple food, and received their second Michelin star in 1965, followed by a third in 1968. In the same year, the restaurant was hailed as “the best in the world” by the celebrated food critic (and founder of the influential Gault-Millau guide) Christian Millau. It would again be named the world’s best restaurant by the Zagat guide in 2007.

When Jean died in 1983, Pierre’s son Michel - who was born in 1958 - came to work with his father, before himself opening his own restaurant near Rouanne, in Ouches, with his own son César in 2017 - representing the family’s fourth generation of culinary expertise.

As well as la Maison Troisgros, the family also runs a brasserie-delicatessen in Roanne, and an inn in Iguerande, in Saône-et-Loire.

Making a success of a French restaurant in 2020

Bocuse: The chef who made cooking a great art