Lion born in France travels to UK to help save species 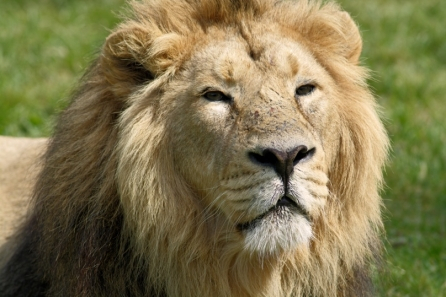 Sahée was born at Le PAL park in July 2016, and will now travel to Bristol Zoo, UK
By Connexion journalist

Male Asiatic lion Sahée was born in France, at the PAL animal zoo and theme park in Saint-Pourçain-sur-Besbre, in the Allier (Auvergne-Rhône-Alpes). On Wednesday July 31 at 15h, he will begin a 21h journey by road to Bristol Zoo, to be coupled with their female lion.

For the moment, the female lion is not yet ready to reproduce, but the hope is that eventually the couple will go on to have cubs.

The species is classified as in danger of extinction by global natural status and conservation authority, the International Union for Conservation of Nature. Experts estimate that only 200-300 wild Asiatic lions remain.

Sahée will make the high-security journey in his transport box, from the park, to Calais, by road. He will then be transported by ferry across the Channel, before being picked up and taken - again by road - to Bristol.

He has been in training for the journey - with his keepers Nilla and Delphine - to ensure that he will be comfortable and happy for the duration.

Sahée was born in July 2016, as a result of the park’s reproductive lion trio, the male Timbi, and two females, Likhita and Laranya.

He was born at the same time as another male, Baen, from Likhita. In the same year, Laranya gave birth to three females, Hima, Bindée and Selva (the latter of which left for a Spanish zoo in 2018).

The transfer between animal parks is part of European animal conservation and biodiversity scheme, The European Endangered Species Programme (EEP). This breeding scheme manages all data from participating zoos, recommends reproduction plans, and coordinates any transfers.

It also helps researchers with projects on relevant species, and raises awareness of endangered species among zoo and park visitors.

The PAL itself also helps to support endangered species and conservation research, including within its charity, la Fondation d’Entreprise Le PAL Nature, which helps to fund local projects.