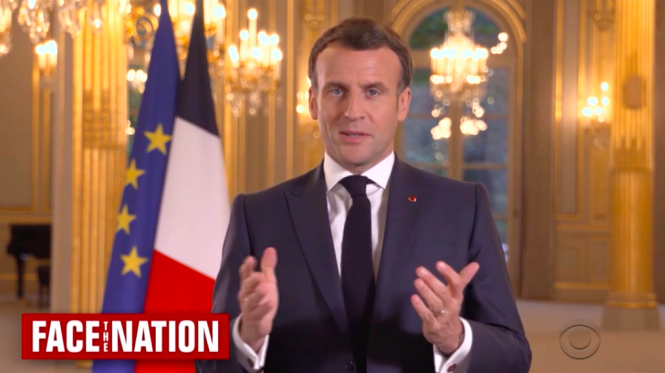 The President spoke about topics including Covid-19, the climate crisis, relations with Russia, racism, and regulation for big tech
By Joanna York

President Emmanuel Macron last night announced a gradual lifting of French travel restrictions for Americans who have received two doses of Covid vaccine, from “the beginning of May”.

The President was speaking in a live interview, in English, for American network CBS news on April 18.

He said discussions on how to resume international travel between the US and France had already started with the White House, with “ministers in charge finalising the technical discussions”.

Mr Macron said that travel would be possible, as France’s vaccination programme was “catching up” with other countries.

He said: “We have vaccinated more than 12 million people… and we will gradually lift the restrictions at the beginning of May, which means that we will organise in summertime for French and European citizens [to travel], but also American citizens."

He said that vaccinated Americans would have a “special pass” for travel to France, but did not immediately expand on what this would mean.

It is likely that he was referring to the European digital pass - a smartphone pass containing health information such as vaccination status - which will be released in June to facilitate travel between European countries.

The President said: “The idea is to offer [the same pass] to American citizens when they decide to vaccinate or with a negative PCR test.”

“The idea is to control the virus, to maximise vaccination, and to gradually lift the restrictions and have the best possible summer - with the opportunity for [American] citizens to come to our country.”

Vaccination ‘partnership’ between EU and US needed

The President praised American efforts in the “innovation and acceleration” of Covid vaccines, but said that Europe would be the global leader in vaccine production in the future.

As such, the US and EU should “team up in the coming months and years” to continue vaccination efforts domestically, but also around the world, he said.

Mr Macron said that France would not use the Russian Sputnik V vaccine to replace deliveries of the Johnson & Johnson vaccine to Europe, which have been paused by the pharmaceutical company as it investigates incidents of blood clots possibly related to the vaccine.

Mr Macron said the Russian vaccine was not being considered as a replacement as it has not yet been approved by European authorities, and the current priority in France is to use vaccines that can be produced in Europe, including Pfizer, Moderna, AstraZeneca, and Johnson & Johnson.

The President also spoke about a “critical” partnership between the US and Europe in giving vaccine aid to poorer countries.

He said: “Between now and June we have to send the maximum number of doses - which is a tiny part of what we get for us [in each country] - to vaccinate workers in healthcare systems in Africa,” and also Latin America.

He acknowledged that this aid was “limited”, but said: “These guys are working hard to preserve the health system, and it’s something we can do”.

After summer, more doses will be sent to vaccinate the wider population, he said.

Key points from the rest of the interview

Mr Macron went on to discuss various topics of global importance, including the climate crisis, relations with Russia, racism, and regulation for big tech.

President Macron to discuss roadmap out of lockdown today