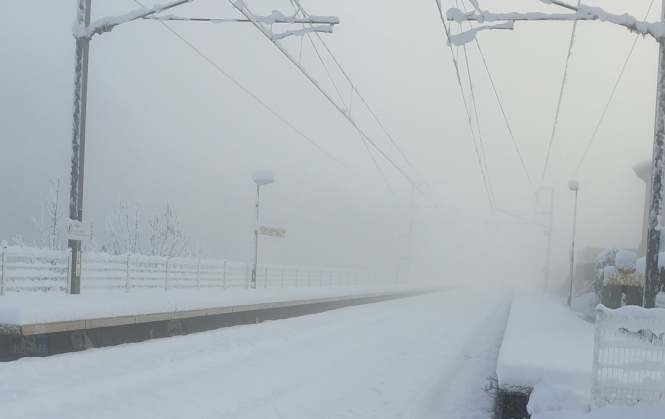 Travel has been disrupted on roads, trains and in airports after heavy snow, with one man dead
By Connexion journalist

Up to 20cm of snow fell across the Drôme, Ardèche and Isère yesterday (Thursday November 14), with up to 30cm recorded in places with an altitude of 300 metres or more.

A 63-year-old man died near Bourgoin-Jallieu, in Isère, as he was attempting to clear snow and a fallen tree from a blocked road, when another tree fell on him. Emergency services were called but were unable to revive him. Another man, aged 27, was also injured, and taken to hospital.

More than 300,000 homes remain without power after the snowfall caused trees to fall and bring down electricity lines in the area, electricity company Enedis said.

A major, 20,000 volt cable fell in Tournon-sur-Rhône (Ardèche); while another came down in the commune of Saint-Julien-en-Saint-Alban, over 25 houses; requiring the occupants to be evacuated by firefighters.

Enedis said: “Our teams have been deployed, but the situation is still developing.”

Train company SNCF has also confirmed that trains will be disrupted on several lines to and from Grenoble today, due to heavy snowfall, fallen trees, or trees that appear to be at risk of falling near or on to the tracks.

The lines Grenoble-Lyon, Grenoble-Valence and Grenoble-Veynes will be most affected. It will still be possible to travel from Grenoble to Lyon, but passengers will need to take “a detour” through Chambéry (Savoie) and Ambérieu (Ain) to do so, SNCF said.

Roads in the area also remain dangerous, with authorities in the Ardèche warning residents to avoid taking the roads completely. In a statement, the department said: “Driving conditions are very difficult. Many trees have fallen over on roads.”

Also in the area, heavy goods vehicles weighing more than 7.5 tonnes have been banned from major roads in the Auvergne Rhône-Alpes to avoid dangerous situations and to help “ease traffic”, confirmed motorway management company Vinci Autoroutes.

Airports in the area, including Lyon Saint-Exupéry, also experienced disruption including delays and cancellations.

Airport authority Aéroports de Lyon said it had delayed some flights due to the need to “de-snow” planes and runways, and that the snowfall had been “very heavy and sticky”, but said that the situation was becoming “resolved” by the evening. Passengers were advised to check their flights before travelling.

Orange weather warnings for more snow and ice had been in place the the area throughout the day yesterday, also including the Loire, Rhône, Saône-et-Loire - but all alerts across the country have now been lifted.