Map: in which French departments are Covid cases rising? 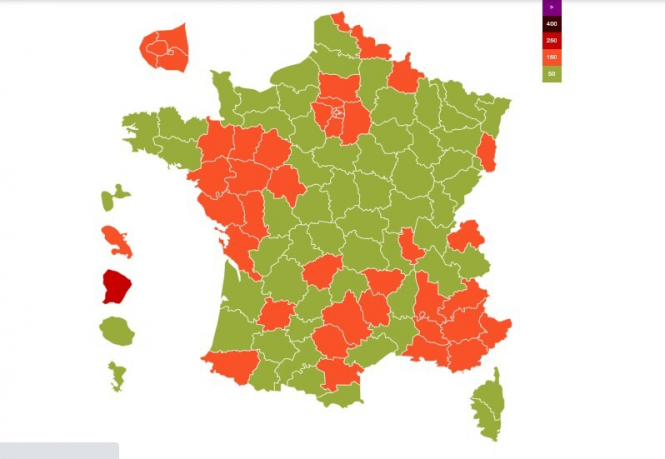 37 departments in metropolitan France currently have an infection rate above 50 cases per 100,000 people Pic: Screenshot / CovidTracker

Covid cases are rising once again after falling for the past two months, and 38 departments in metropolitan France are seeing infection rates of more than 50 cases per 100,000 people.

This rate is the seuil d’alerte threshold under which certain Covid restrictions can be eased slightly, with limits on social mixing in schools relaxed and mask-wearing becoming optional for primary pupils.

The average infection rate for all of France was 53 cases per 100,000 people as of yesterday (October 25), and the positivity rate – the proportion of positive test results out of all tests taken in a given period – was 1.63%, figures from government-approved site CovidTracker show.

Elsewhere in mainland France, the highest rates are largely concentrated around the west, south and south east.

On October 11, every department of western France apart from Mayenne was below the 50 cases per 100,000 people marker, but Ille-et-Vilaine, Sarthe, Loire-Atlantique, Maine-et-Loire, Indre-et-Loire, Deux-Sèvres, Vendée, Charente-Maritime, Lot-et-Garonne and Pyrénées-Atlantiques have tipped over the seuil d’alerte.

Similarly, two weeks ago the only Occitanie departments above this threshold were Lozère and Aude. These have now been joined by Aveyron and Tarn.

Please note that these figures were correct as of October 26, but fluctuate delay.

*Note: All the figures in the article above in brackets correspond to the incidence rate per 100,000 inhabitants, not their respective department numbers

Masks to remain mandatory in Alpes-Maritimes until November 2