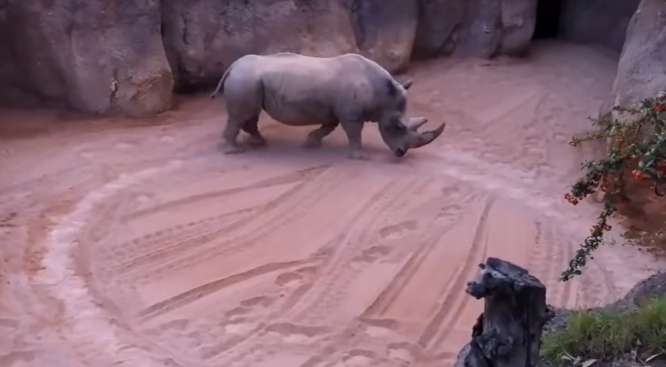 The deputy mayor made the proposal as part of a Facebook post (and similar Tweet) decrying atypical behaviour seen by the rhinoceros Romulo, who had been in circus captivity and kept in a small cage for 23 years before being freed.

After being moved to a larger area, Romulo was filmed walking round and round in circles without stopping, which is reportedly atypical behaviour for a rhinoceros, and appeared to be a result of the animal’s years in captivity.

Mr Payan said: “These images are unbearable and tell of the distress and mistreatment that these animals suffer.”

Mr Payan’s post did not share any further specific details of the proposed circus ban, if it would definitely happen, or when it might come into force - but the sentiment was welcomed by many animal rights campaign groups.

Journalist and activist Hugo Clément tweeted a “clapping” emoji symbol in response to a similar post by Mr Payan on Twitter, and added a link to his campaign for a citizens’ referendum on animal cruelty practices.

The news was also welcomed by animal rights group L214.

Several cities in France - including Paris, Strasbourg and Lille - have already banned circuses that use animals.

The video shared by Mr Payan is not new, but has been widely shared on Twitter in recent weeks.

Since the video was taken, Romulo is reportedly doing much better. He had been kept captive at the Valencia zoo (in Spain), but was later transferred to a natural reserve near Seville.

According to local newspaper Levante-EMV, who spoke to Romulo’s carers in a 2016 interview, the rhino no longer requires veterinary care, and no longer shows atypical behavioural signs of trauma or captivity.

The announcement from Mr Payan comes as animal welfare campaigners deplore the news that a new list of government ministers does not include the role of junior minister for animal welfare.

The list was issued as part of the reshuffle that took place within the French government earlier this month.

The L214 group tweeted: "No junior animal welfare minister...will the "preservation of the living (another minister's title) also concern animals? Animals used for food, for distraction, or the forgotten [scientific] animal testing in labs...?"

There is a junior minister for biodiversity, who works as part of the ecology ministry, but the role's remit is currently unclear.

The minister, Bérangère Abba, recently described her role as "preserving living beings, nature, and the environment".

What will happen to circus animals?

1 day ago
5
SW France: tourist shot in car on motorway