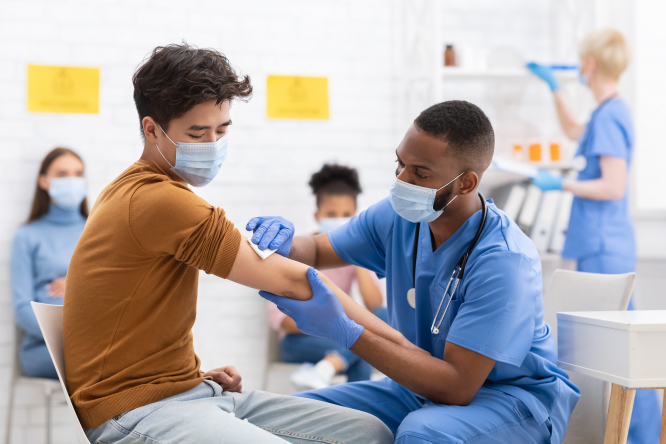 France’s booster campaign will open to all adults this weekend Pic: Prostock-studio / Shutterstock

Booster doses will soon be available to all adults in France and integrated into the health pass system from January, as part of a series of new health measures announced today.

The measures represent a significant stepping up of the booster campaign. Previously, availability to over-50s was only set to start from December 1, with the start date for younger adults having been unconfirmed.

This expansion of the booster campaign will begin this Saturday (November 27).

Read more: Covid booster for all adults in France: Majority in favour of new rule

After this date, any adult who has not received their booster seven months after their final dose will see their pass expire.

This gives people two months after they become eligible for the booster to go for their extra injection.

France’s TousAntiCovid health pass app will also be adapted to include an alert system warning someone when they are reaching their booster dose deadline.

This change will come into force on Monday (November 29).

Negative PCR and antigen test results can currently be used to create a health pass valid for 72 hours, but the recent rise in case numbers has pushed the government to tighten the timeframe.

“If you are not vaccinated and you wish to access the health pass you must get tested every day, at your own expense,” Mr Véran said.

Mr Véran said that today “I am announcing neither a lockdown, nor a curfew, nor business closures nor limitations on movement.

“We are choosing to combine freedom with responsibility. We believe at the moment that we can get through this wave without having to resort to more restrictive measures if we use effectively the cards we have in hand.”

The European Medicines Agency is expected to approve Covid vaccinations for five to 11-year-olds this afternoon, according to Mr Véran.

He will then consult the Conseil national d’éthique and HAS to determine whether France’s vaccination campaign should be extended to this age group.

If they are in favour, younger children will be able to get vaccinated from the beginning of 2022, by which time the country will have enough vaccines with child-friendly dosages.

Masks must also be worn in busy outdoor spaces such as Christmas markets, where it will also be necessary to show a health pass.

Specific rules for different types of venue will be published in due course, Mr Véran said.

“Each of us is responsible for the health of others. [...] The small constraints of today are our key to freedom,” he added.

“We have the tools to combat this fifth wave. If we manage to mobilise all of these tools, we can succeed in overcoming this wave.”

Mr Véran concluded by encouraging the public to redouble their observance of social distancing and hygiene measures such as hand washing and increased room ventilation.

Primary school classes will no longer be sent home as soon as a single Covid case is reported, Education Minister Jean-Michel Blanquer announced.

Read more: Guide to Covid rules for parents and pupils in France

Instead, the whole class will undergo “systematic testing”, whether at school or at a pharmacy or health centre, and only those who return negative results will be allowed to attend in-person lessons.

This change will take effect “over the course of next week,” Mr Blanquer said, adding that there are currently 8,500 classes closed across France.

He reminded listeners that tests remain free for all under-18s, and so it should be easy for pupils to access one.

In general, schools will remain at alert level 2 across the country, meaning that limits on class mixing and indoor sports lessons will continue to be observed.

The package of new measures will be published in a decree tomorrow (November 26), Mr Véran said.

France’s director-general for health, Jérôme Salomon, stated at the beginning of the press conference that “Europe currently represents 67% of new infections recorded globally.”

The rapid expansion of the booster campaign comes shortly after France’s health service quality regulator Haute Autorité de Santé (HAS) recommended that the campaign be opened up to everyone over the age of 18, and that the gap between second and third doses be shortened by one month.

This advice is “based on the results of modelling data published by the Institut Pasteur,” HAS said.

The organisation had previously stated that a booster dose should be given six months after the second, but now “considers that the worrying context regarding the epidemic justifies an acceleration of the vaccination campaign through the shortening of the gap between the first vaccinations and the booster.”

Around 25 million people will now be concerned by the booster programme, of which some six million have already received their extra dose.

Mr Véran also pointed out that in Germany, where Covid cases have been surging in recent weeks, infection numbers are higher in regions where fewer people are vaccinated, and that boosters are an important weapon against the virus because the initial protection offered by vaccines decreases over time.

“If we did not have the significant vaccination coverage [that we have], we would be overwhelmed by the epidemic wave [...] and probably, at this point, be back in lockdown,” he said, adding that the proportion of unvaccinated patients in French hospitals is “10 times higher than that of vaccinated people.”

He added that: “We are going to open, reopen and expand the vaccination centres” currently available to people in France from this weekend.

People who were vaccinated with Janssen are already eligible for a booster dose one month after their first and only dose.

Why is France facing fifth Covid wave with 75% population vaccinated?