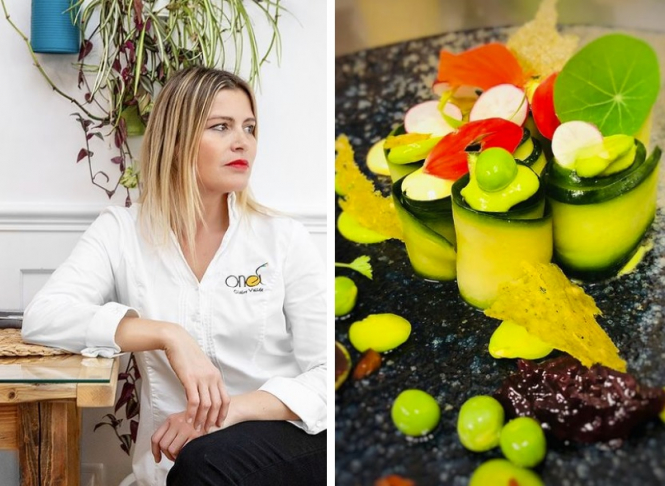 A vegan restaurant in the South West of France has become the first to be awarded a Michelin star in the French Guide, as the prestigious ceremony went ahead despite the challenges of the pandemic.

Chef Vallée opened the restaurant in in the town of Arès, near Bordeaux, in 2016.

She told the Agence France-Presse: “I was alerted by the Michelin Guide on Thursday evening and it was as if a train had hit me. I couldn’t believe it. I wasn’t with it at all, I was in the middle of doing a recipe for a radio interview, and then I was told via video that I had a star…”

As well as the usual Michelin star, the restaurant was also awarded a new “étoile verte (green star)”. This award was introduced last year, and rewards restaurants for their eco-friendly and sustainable practices. Around 30 other restaurants also received the accolade.

Chef Vallée said: “We also found out that we had a green star too. Two in one go is a lot [to take in]!”

ONA has a seven-course tasting menu, which includes unusual and creative flavour combinations such as “pine tree, cep, and saké” and “celery, tonka, and amber beer”.

The restaurant has been closed due to the pandemic, but the Michelin star is a boost for the team.

Chef Vallée said: “It’s very emotional for us, our friends, our family, our suppliers, clients, and staff who worked to create this restaurant. We had around 80 volunteers for two months in 2016 who helped us build the restaurant.”

The restaurant opened after a public participation finance campaign, and took no traditional bank funding or angel investment. Instead, the team used online donors and “honour loans” from ethical bank La Nef - as traditional banks did not, Chef Vallée said, “believe in the project”.

She said: “It’s not revenge. Everyone is just doing their job. [But] at the time, they told me that there wasn’t enough support for vegan or vegetarian, or food from the area, or the site that I chose.

“But I knew that I had a few strings to my bow. And nothing is impossible.”

The chef said that the team had been “aiming for a star without concentrating too hard” on it, especially after the restaurant was awarded a Michelin “Fork” in 2018.

A Michelin Fork, or "fourchette" in French, denotes the quality of the experience for diners in the restaurant, apart from the food.

She said: “We wanted to be among the best; I know chefs with stars, and I was asking myself if we were at the right level because vegetables can be tough, it’s innovative...we were doing something completely different, but which is still accessible to everyone.

“[But] as long as people enjoy it, that is always the main thing.”

Chef Vallée also said that she had taken inspiration from other pioneering chefs in the vegan and vegetarian space, including, she said, “Jean-Christian Jury, who died last year, but who had owned La Mano Verde in Berlin”.

In another high-profile win, Mory Sacko, head chef at the restaurant MoSuke, also picked up a Michelin star in this year’s French Guide.

Chef Sacko was one of the standout competitors in the TV competition Top Chef, shown on channel M6.

MoSuke - Chef Sacko’s first restaurant - opened in the 14th arrondissement in Paris in 2020. It serves food that has “twin influences; African on the one hand, and Japanese on the other [while] using products from our dear French land”, the chef has said on Instagram.

The restaurant is even named “‘Mo’ for ‘Mory’ and ‘Suke’, in homage to (Ya)suke, who was the first and only African Samurai who existed in Japan”, Chef Sacko explained.

He said: “This restaurant is my ‘ikigai’ (my purpose and reason for living).”

The Michelin Guide especially picked up on one of the restaurant’s signature dishes, which includes "beef picanha with tamarind maté sauce".

Its website reads: "Beef rump steak marinated in shea butter, soft and juicy, lightly marbled and cooked rare through; garnished with fine crunchy peanut petals, and served in a silky sauce with a sweet maté flavour, between tea and coffee, giving a light roasted bitterness.”

The chef was also joint winner of the Michelin Guide’s 2021 Jeune Chef (Young Chef) award, with another ex-Top Chef competitor, Clonie Faulquier, who was a finalist of the show’s seventh series.

The Michelin Guide also announced that it had maintained all of its three-star sites for 2021, and that it was a good year for new one stars, but that despite the pandemic, the Guide had not compromised on quality.

Gwendal Poullennec, international director of the Michelin Guides, told newspaper L’Obs: “It makes sense for restaurant customers to keep the real value of the stars.”

For the first time ever, the announcement of the new Guide was via social media video link due to the pandemic, and broadcast at midday exactly from the Jules Verne restaurant on the second floor of the Eiffel Tower.

Filming for parts of the announcement took place in secret last weekend, with only a handful of chefs present, and no members of the public.

Ms Poullennec said: “The question was obviously raised as to whether or not to publish a selection. But...what we have just gone through has been particularly difficult for the restaurant world, and at a time when restaurants are still closed, it is our responsibility to continue to promote them and help ensure that they are not forgotten.

“This is an important event for the profession as we await the recovery [of the industry]. It will be an opportunity to highlight the fighting spirit, courage and talent of our chefs; to promote their local producers; and to encourage all food lovers to make good restaurants a part of their daily lives again as soon as possible.”

For the third year running, the Guide also awarded accolades to different staff within the restaurant industry, including sommeliers, patissiers and front of house.

Poll: French happy to cut meat intake but not dairy