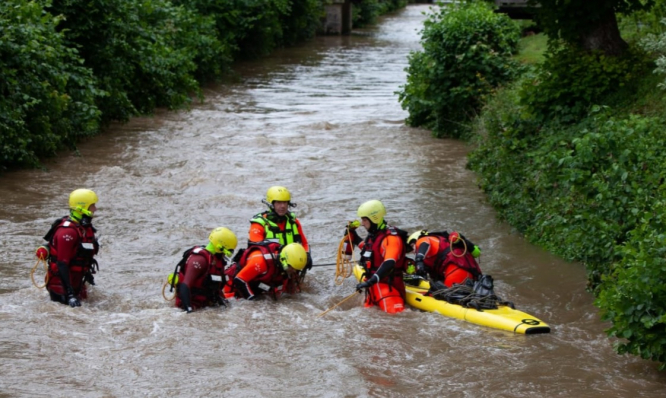 More extreme weather has hit France with another ‘mini-tornado’ ripping off the roof of a farm building in the east of the country, a teenager still missing in floods and calls for the state to declare an official ‘catastrophe naturelle’ in parts of Oise, Hauts-de-France.

Strong winds hit the commune of Verrières de Joux in Haut-Doubs, near the Swiss border, ripping the roof of a farm building late-morning yesterday (June 22). All of the hay and grass being stored inside was blown away.

The farmer’s wife told FranceInfo: “It didn’t last long, the tornado then moved in the direction of Switzerland, and we could see the shape of the tornado twisting round.

“It was 11:45. We saw the tornado appear, we saw trees falling one after the other, we heard the noise, and then we saw the roof blow away.”

No humans or animals were injured. The tornado avoided the main village buildings by about 200 metres, witnesses said.

It comes after the Doubs region was already battered by huge hailstones the size of tennis balls, which caused extensive damage to cars, garden tables, and roofs.

Images of the tornado gathered by locals will be sent to tornado observatory Keraunos to evaluate the strength of the phenomenon. Given the damage it caused, the speed of the ‘tornado of Verrières de Joux’ has been estimated at 120-150kph.

Meanwhile, a 17-year-old boy is still missing after “suddenly” falling into a river in Oise during a storm two days ago (June 21).

Sniffer dogs, 18 divers, and drones with thermal cameras have been deployed along the Thérain river in an attempt to find him and an inquiry has been opened.

The teenager was reportedly out with friends to celebrate Fête de la Musique, with CCTV images showing a group of young people close to the river and rising water at around 23:00. Two people tried to rescue the boy without success.

The Oise prefecture has also confirmed it has received 15 requests for it to recognise the weather as a ‘catastrophe naturelle’. This is an official state that must be declared by authorities before certain specific insurance claims can be processed.

During a visit to the area, Interior Minister Gérald Darmanin said that a catastrophe naturelle would be declared in the next few days. He also said he “feared the worst” for the young missing boy.

The storms caused up to 60mm of rainfall in just one hour, and firefighters were called to assist at 600 incidents in Beauvais, Tillé and Auneuil the same evening.

Storms and heavy rain earlier one the same day also caused flooding in the centre of Reims for the third time in two weeks.

Oise prefect Cyriaque Bayle said that "several dozen homes” had had their “ground floors mostly destroyed" along with "many businesses, shops, cellars, and warehouses” whose basements had been affected, as well as shops in “downtown Beauvais, [where] the roofs cracked and collapsed”.

He said that emergency services responded to almost 1,000 incidents during the storm overnight from June 21 to 22, and that the region is now working to rehome people whose properties have been worst affected.

Much of central-eastern France is still on alert for storms, according to forecasters.

The weather is being caused by a blast of cold air between the Bay of Biscay and the western Pyrenees, meeting the flow of warm and humid air between the Pyrenees and the northeast regions.

As a result, thunderstorms are forecast into the afternoon and the evening today. The intensity should then gradually decrease, but not disappear completely, with thunderstorms still expected in the centre-east and the north-east during the night.

Thunderstorms may be seen from the Lorraine area to the Auvergne-Rhône-Alpes region, with heavy rain and possible hailstones predicted.

Much of the intense weather seen in recent days happened in departments that had not previously been on high alert, however, as storm clouds gathered much faster than anticipated.

Ludovic Lagrange, a forecaster, said: “After the period of strong heat that we experienced at the beginning of last week, we had cold air arriving in France, which has since been hovering over the country, and it is the contrast between the cold air at altitude and the warmer air on the ground that causes this long-lasting stormy situation.”

Sabrina Speich, a professor at the dynamic weather laboratory in Paris, said that climate change may be playing a role in intensifying the phenomenon.

She said: “Evaporation of ocean water is increasing, so the atmosphere probably contains more energy and more water vapour, and that gives rise to more intense events.”

Insurers predict that costs due to weather damage will double in the next 20 years as a result.