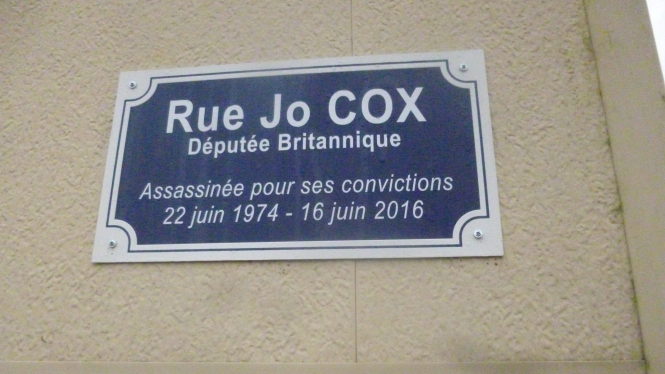 The town of Avallon in Burgundy decided to honour the MP, who was killed aged 41 by a man with far-right connections in the run-up to the Brexit referendum. Tying in with the annual Trailwalker in May this year, a street was named after her by the mairie and the head of Oxfam France.

Trailwalker, which is also held in nine other countries, involves a 100km circuit in a team of four (together, not as a relay) in less than 30 hours. Last year’s saw 242 teams raise an impressive €439,034 for Oxfam France’s work helping people in need around the world.

Deputy mayor of Avallon Gérard Delorne said 2018's race will once again start along rue Jo Cox, in honour of the MP, who worked for Oxfam before going into politics including periods as head of advocacy for Oxfam UK, head of the Brussels office and head of humanitarian campaigns for Oxfam International in New York.

Mr Delorne said: “The charity race has been organised in our town for six years and as we had a street that had come up to be named, and the race passed down it, we decided to name it after her because of her commitment to Oxfam and her strong values of defending the weak and oppressed, and the circumstances of her death. The idea was initially the mayor's, and he convinced us all.

“Oxfam France were delighted that we chose to name the street after her. Some of the locals didn’t know her, but we explained who she was to the local paper and it was an emotional moment when we had the inauguration ceremony with the 1,000 walk participants in the street.”

If you want to take part in next year’s walk, it will be on May 26-27 – once again starting in Avallon for a circuit through the Morvan regional natural park. There are reductions on participation fees for teams signing up before the end of January here.

Or if you prefer 60km of snow shoe walking, there is a winter version in March in Savoie...

The city of Brussels has also placed Mrs Cox on a list of illustrious people to be honoured in street or square names when opportunities come up.