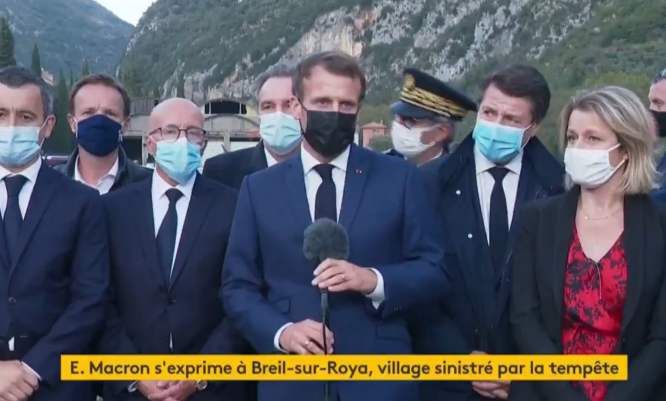 Those affected by the devastating flooding in the Alpes-Maritimes now have 10 days to contact insurers for their natural disaster claims.

He said at least five people know to have died in the floods in the department, and another seven are still missing.

Those whose homes were damaged should now lodge their catastrophe naturelle insurance claims with their home insurers. They should make contact with them as a matter of urgency, giving key information on the loss, if possible accompanied by photos.

Typically the insurers will aim to rapidly send out an expert assessor to observe the details, if feasible. President Macron urged insurers to act as “simply and as quickly as possible”.

The full list of communes can be consulted in Le Journal Officiel. Note that they are grouped under whether the claims may be for: ‘floods and mudslides’ (in the mountain areas) and, in coastal areas, ‘floods due to the shock from the action of waves’.

During a visit to one of the worst-hit communes, Breil-sur-Roya, the president announced further financial help to the zones affected, on top of the insurance claims, which in France are organised in a state-backed scheme, hence the need for a ministerial decree opening the way to claims.

He referred notably to a fonds d’urgence 06 (emergency fund for the Alpes-Maritimes) saying the prefect of the department was contacting all parties likely to be able to contribute, such as the SNCF, the regional council, the Métropôle Nice Côte d’Azur intercommunal body etc.

The state will also “take its responsibilities”, the president said, stating that €100million has already been released, and that there would be several hundred million more.

Additional money for helping to rebuild homes will also come from the Fonds Barnier, Mr Macron said. This is a European natural disaster fund from which €50million has already been sourced. The president said this fund will help up to 80% of residents who were victims of the floods.

He also stated that one of the immediate priorities will be to re-establish damaged roads and the water and electricity supplies.

“We are going to invest to rebuild, including essential infrastructure, but in a resilient and lasting way. We have to minimise areas of ground that are covered over artificially and plan so as to prevent risks.”

The impacted areas will not look exactly the same after reconstruction, he added, saying that some of the houses destroyed would have to be rebuilt differently, or in some cases not at all, due to their location. It was also possible that some people will be told to evacuate remaining homes because they face too much risk.

He said support teams are being mobilised, both for social work, psychological support and administrative help, in a bid to help locals deal with the challenges they face.

In Tende, resident Cathy Jooris, 67, told The Connexion they have now had their electricity re-established, and they have been told that priority will be given to re-establishing a rail link with the coast, as this is likely to be quicker than rebuilding damaged roads.