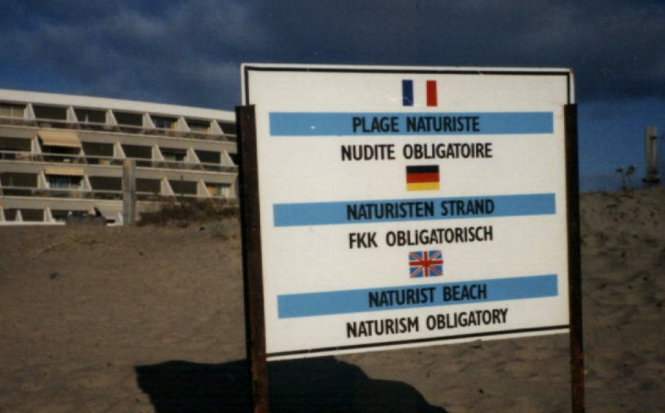 Elsewhere nearby, masks are now mandatory.

Holidaymakers in the area, who do not have serious symptoms, are being advised to return home by car and avoid public transport.

The decision was taken after the spike in cases, and after “more than 30% of tests” came back positive in a single day last week.

In a statement, it added: “Among the voluntary people who came to be tested, the level of positives among the people who had visited the naturist village was four times’ higher than those of people who had stayed in the town of Agde, but who had not visited the [naturist] village.”

Reports suggest that holidaymakers at the resort had been ignoring social distancing measures, and staying close when socialising, prompting the virus to spread.

One visitor told UK newspaper The Telegraph by phone: “In the evening, we’re all huddled together, which means preventive measures or physical distancing are impossible. Frankly, this is a place where you come to meet people. No one comes here to play cards.”

But a spokesperson for the village said: “Our customers are disciplined and they have respected health rules and barrier gestures. I don’t think you can say that people have been more careless here than anywhere else.”

No second wave - this is ‘still the first’

The closure comes as senior infectious diseases specialist, Professor Jean-François Delfraissy - who is also president of the government scientific advisory body le Conseil Scientifique - has said that France is “still in the first wave of the coronavirus epidemic”.

Suggestions have been made that France could be in the “second wave” of the virus after almost 5,000 new cases were reported over 24 hours on Sunday (August 23) - with the majority of cases being identified among people aged 20-40, according to the health minister, Olivier Véran.

Read more: Covid France: Why cases are up but hospitalisations stable

But Professor Delfraissy said that the sharp rise in cases in France in recent weeks was not a sign of a “second wave”, but in fact still “the first”, which is returning due to a “too-high loss of physical distancing measures”.

He told news service FranceInfo: “This is the same wave that is getting worse, and which is starting back up again because we have lost the social distancing measures.”

This “restart” of the epidemic is happening even in places that were not especially badly-affected by the epidemic earlier in the year, he said, such as Mayenne, and the Provence-Alpes-Côte d'Azur and Aquitaine regions.

Professor Delfraissy warned: “We will not be able to stay like this, that is becoming clear.”

He added that testing was an important tool to keep the epidemic at bay, and warned that social distancing would continue to be paramount while there is not yet a vaccine against the virus.

He said: “We do not have any public health measures to offer, [as] we have neither a drug nor a vaccine. So our future in the next few weeks is within our hands, and social distancing measures.”

Professor Delfraissy clarified that patients were being “better taken care of now” than at the beginning of the epidemic, as doctors were learning to “discern severe cases” earlier, and “have medication for severe forms” of the virus.

Another specialist, Professor Arnaud Fontanet at the Institut Pasteur, told news channel BFMTV that the prognosis for patients was improving as the epidemic continues, even for older people.

Naturism on the rise in Paris as naked events soar