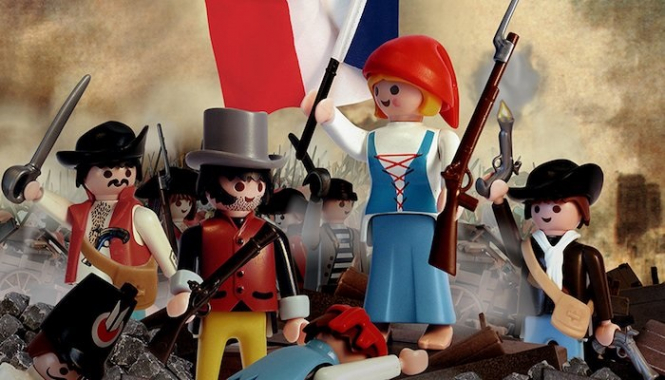 Scenes from French history have been depicted through the show, all made from painstakingly collected Playmobil sets
By Connexion journalist

The exhibition will be on display until January 5, 2020.

It shows thousands of tiny plastic figures arranged in military scenes such as Louis XIV in front of the château de Versailles, Napoleon in Egypt, and soldiers preparing for the Normandy Landings.

The show has been arranged by collector Jean-Philippe Broussin, in collaboration with the Playmobil brand. It includes an explanation booklet in French or English, and there is also a space set aside for children to play with Playmobil figures as part of the fun.

Logistics manager Laetitia Tarabelli said: “[Collector] Jean-Philippe...all year long, every weekend, he goes on the hunt, goes to flea markets [to find more figures and Playmobil boxes]...Second-hand toys are even better. Many of the older pieces are more malleable than the current ones.

“[For example] we can do what we want with the Château Royal de Blois, which has been created piece by piece. The gate was taken from one box, the turrets from another one, so it’s really a historical design project right from the beginning, even before it’s built.”

Army museum education manager Sylvie Picolet said: “Basically, we are trying to attract people who may not normally come [to an exhibition here]. We have both children who love the toys, and the historical reality. Having said that, they are customised toys, modified by an artist who is not too worried about historical realism. So sometimes people will need to imagine such and such a scene."

Yet, Alain Sylvain, from Playmobil, explained that the historical scenes had been made to look as realistic as possible, within the constraints of the brand, and the childlike nature of the show.

He said: “We have tried to remain as close to reality, without going overboard. We don’t want to shock any children...[But] Mr Broussin wanted to do something quite realistic from the outset.”

He added: “We do not have a 'war scene', because there are no dead people, even though paradoxically, the brand is capable of making pirates. [But] there has always been violence included in toy brands. Tin soldiers were created three centuries ago, and they were always made to play ‘at war’.”