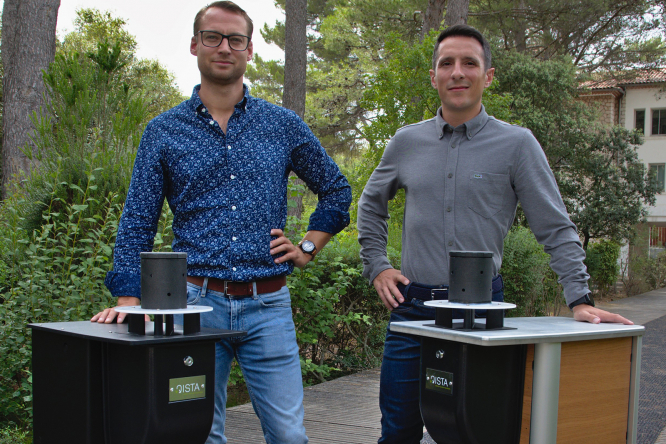 Mosquito bites could be (almost) a thing of the past with new non-toxic bait traps which use the odours of smelly feet and mushrooms to cut the number of bites by nearly 90%.

Designed by two friends in Arles, Bouches-du-Rhône, the traps are €1,000 each with running costs from €65/month.

Pierre Bellagambi, one of the two founders, said: “For your money, you get an 80% to 94% reduction in the number of mosquitoes, and without using pesticides which poison other insects as well.

“For local authorities, the savings are much more significant – our research shows that towns in regions like the Camargue spend up to €4million a year on anti-mosquito measures, where our traps for councils, which are stronger than domestic ones, cost €2,000.”

He added that the traps, which cover an area up to a hectare, improve the comfort of people in mosquito zones and give real public health benefits.

The traps use carbon dioxide and a mixture of baits to attract ordinary mosquitoes or the invasive tiger mosquitoes which came into Europe from Asia and can pass on tropical diseases such as chikungunya and dengue fever.

Bait for the tiger mosquitoes is designed to smell like the bacteria on human feet, shins and arms, their main targets for biting. Bait for ordinary mosquitoes smells more like mushrooms.

A small electric fan, similar to those in computers, blows the bait and carbon dioxide to create a smell profile like a human’s. As mosquitoes enter the trap, another fan pulls them into a net, where they die of dehydration in the air flow.

Mr Bellagambi said the units make no more noise than a house fan and cannot be heard from four metres away.

Regular maintenance requires emptying the dead mosquitoes from the net – they can be fed to fish or put in the compost – and monthly recharges of the baits and CO₂ cylinder.

Targeting only females is important as mosquitoes mostly feed on plant nectar and are a link in the food chain, being preyed on by birds, bats and dragonflies.

If female mosquitoes are caught, they cannot lay eggs, thus reducing the population, which would otherwise grow each breeding season.

Tests by the Tour du Valat research centre in Arles showed the machines had no negative environmental impact.

Mr Bellagambi and friend Simon Lillamand set up their company Techno BAM (for Borne Anti-Moustiques) in Aix-en- Provence to sell Qista. Householders and councils are its key customers and it has sold 4,500 machines in France.

They are opening up to exports, with markets including French overseas territories and Canada, the US, Singapore, Italy, Spain, Croatia and Greece.