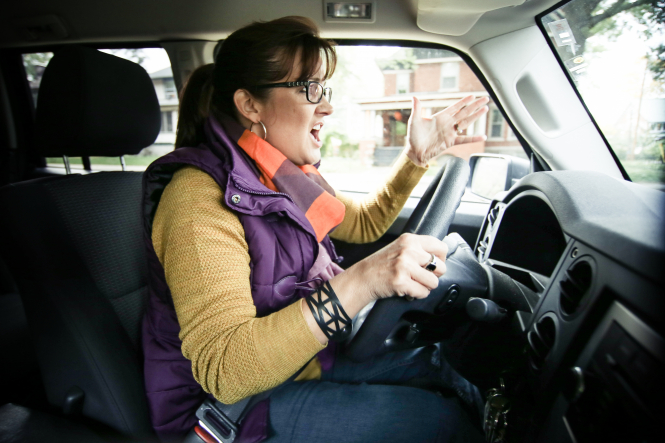 Drivers also admitted to beeping the horn and even getting out of their cars to continue disputes Pic: State Farm / Flickr

A new study has found that drivers’ behaviour varies from region to region in France, with people from Provence-Alpes-Côte d’Azur most likely to insult others while behind the wheel.

In the PACA region 70% of drivers said they would insult others while driving, followed by 68% of drivers in Auvergne-Rhône-Alpes, Hauts-de-France and Ile-de-France.

Drivers in Normandy were found to be the politest, with only 55% likely to insult others.

Shouting insults was the most usual way for drivers in France to express frustration while on the road, with 65% of people overall admitting that they do so.

But beeping the horn was also popular among 53% of people surveyed, with people in Paris (65%) and Marseille (64%) most likely to show their irritation in this way.

Ile-de-France (25%) and PACA (24%) also came top for drivers who said they would get out of their car to carry on a dispute with another driver.

The survey* was carried out by Ipsos for the Vinci Foundation. Vinci autoroutes is responsible for over 4,000km of motorway in France.

Bernadette Moreau, representative for the Vinci Autoroute Foundation told Capital that drivers might be ruder in PACA and Ile-de-France as “traffic is denser and driving is more stressful”.

Drivers admit to phone use and driving over the limit

The survey also asked drivers about their general behaviour behind the wheel, with 74% saying they did not always follow the rules of the highway code.

Over half (54%) said that they made Bluetooth calls while driving. Ms Moreau said that this is technically allowed, but “it does constitute a distraction, as do other types of call”.

A further 17% said they made calls without hands-free kits, 27% admitted to texting while driving and 5% even said they had watched videos while behind the wheel.

Overall, 10% of people said they had had an accident due to using a phone while driving.

Drivers were also asked about alcohol consumption, with people in Brittany (18%) the most likely to knowingly drive when over the limit.

In PACA, 15% of drivers said they had either had or almost had an accident due to driving over the limit, compared to 12% in Brittany and Nouvelle Aquitaine.

*Study conducted online by Ipsos for la Fondation Vinci among 12,400 participants aged 16 and over in 11 European countries, including 2,400 people in France, and 200 from each French region (except Corsica).

1 day ago
3
Can an unvaccinated Briton travel via another EU country into France?