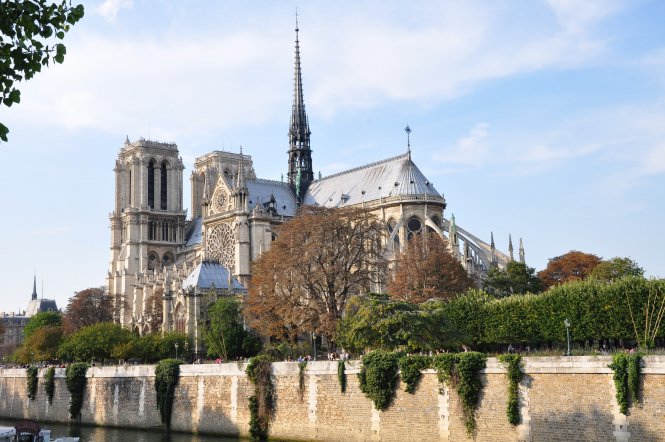 The archbishop of Paris has discussed the possibility of modern decorations being introduced inside Notre Dame cathedral, as the iconic building is rebuilt following damage caused by a major fire in April 2019.

Priest Gilles Drouin, in charge of the rebuild, told news source Le Parisien that "nothing is forbidden" when it comes to renovating and redecorating the cathedral.

He discussed the possibility of replacing the original stained glass windows with something more contemporary, even though the originals were saved in the fire - as well as bringing in modern furniture into the cathedral, which dates back to the 1100s.

Previous discussions over a new, modern design for Notre Dame’s famous spire which was destroyed in the fire were met with anger in some quarters. A final decision was made to keep the original design.

The latest suggestions for change have provoked similar outrage.

Journalist Stéphane Bern, known for his commitment to national heritage in France, wrote in Le Parisien: “Notre Dame must be restored to her previous state”. He added that as the building belongs to the State, the historical design – including the original stained-glass windows – should be maintained.

While the archbishop is leading the renovation works, the culture minister must be consulted before decisions are made.

This comes as the final pieces of the scaffolding that surrounded the spire were removed yesterday (November 24).

The structure, which was made up of 40,000 pieces and reached 40 meters high, was deformed as the heat of the fire soldered pieces together. The remaining 200-tonne structure was a risk to the building below and removal began on June 8.

Before removal, it had to be secured with three levels of metal girders and additional scaffolding. Scaffolders then had to remove accessible pieces using hanging baskets for support, while rope access technicians worked at close proximity to remove burned pieces with sabre saws.

An 80-metre crane was installed to help evacuate removed pieces.

By mid-August, this work was finished but the girders could not be moved while wind was gusting at over 36kmph.

By the end of October, the scaffolding had been separated into four independent, stable pieces, and support baskets could be removed. The final pieces of the structure were removed yesterday.

General Jean-Louis Georgelin, who is overseeing the rebuild, said: “The threat posed to the cathedral by this structure has now been addressed. We are now going to be able to tackle the last steps of securing the site.”

A window to heaven: 800 years of Metz cathedral