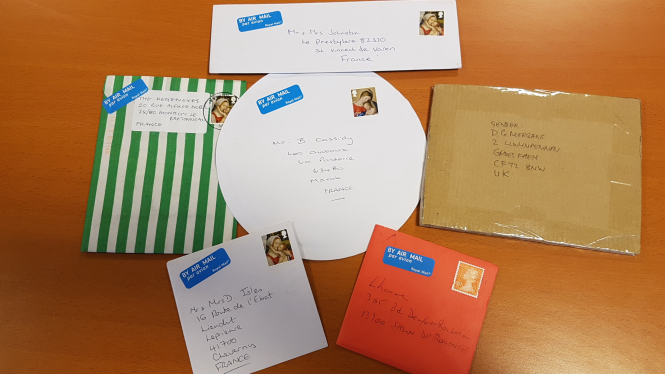 Following admissions by Royal Mail that they have had issues getting mail to France on time due to weather conditions in the UK, La Poste has told Connexion there have also been problems in France.

However a spokeswoman said this is because “every year there is a large increase in the volume of mail from the UK at the year end, and in most cases these letters cannot be automatically processed by our machines”.

She added: “Some are very small, some are highly-coloured; we even got ones made of wood [La Poste sent the image accompanying this article as an example of British envelopes].

“In other cases the post codes are not completed properly: we saw many of them with numbers missing from them.

“Added to that we can tell some letters had taken their time in the UK, because some envelopes we dealt with recently had dates on them such as December 14 or 18.”

Meanwhile Royal Mail said it may be possible to claim compensation for late mail. A spokeswoman said people may visit this link for more information.

She advised contacting their customer services teams if you have any queries about your mail via www.royalmail.com, via Twitter @RoyalMail or on 00 44 (0)3457 740740.