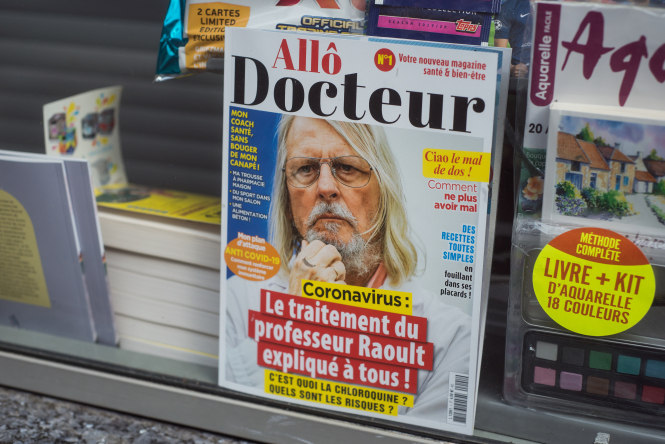 The famous doctor has hit headlines during the health crisis due to his alternative ideas on how manage the virus Pic: NeydtStock / Shutterstock

Controversial doctor and professor Didier Raoult is to be asked to leave his role as the director of the specialist infectious disease hospital, IHU Méditerranée Infection, which he founded in 2011.

The hospital is affiliated with nearby hospitals l’Assistance publique-Hôpitaux de Marseille (AP-HM) and d’Aix-Marseille Université (AMU).

Leaders in the two institutions have proposed that a successor be found for him.

François Crémieux, head of AP-HM since June 2020, said: “We need to turn the page and organise the future of the hospital for the next 20 years.”

Professor Raoult, 69, is set to retire as a professor and a doctor on August 31. His role as director is not subject to the same age limits, but Mr Crémieux said it would “not be reasonable” for the hospital to be directed by a professional who was no longer practising.

Professor Raoult has not responded to questions about leaving his role as director.

IHU Méditerranée Infection has said the matter will be discussed in September, but that it is open to Professor Raoult continuing in his role.

Professor Raoult is a household name in France for his work and outspoken views.

Throughout his career he has been awarded numerous national awards such as being made an officer of the Legion of Honour and a commander of the National Order of Merit.

More recently, he controversially advocated use of the hydroxychloroquine drug to treat Covid-19 – a method endorsed by former US President Donald Trump.

His claims lacked scientific evidence and an official complaint from peers in the medical community was lodged against the professor.

He also refused to be a member of government advisory body le Conseil Scientifique during the health crisis, claiming decisions made by the group were not based on science.

And his opinions on the Covid-19 vaccines have added fuel to the anti-vax movement in France.

While the professor has not said he is completely against vaccines, he has said he is not sure they should be used on people under 65, and early on in the crisis said that he was “sceptical” that a vaccine would be effective against the virus.

He has also recently released videos on his YouTube channel saying the Delta variant is “less serious” than other variants.

Professor Jean-Luc Jouve, president of the commission médicale d’établissement (CME) at AP-HM linked Professor Raoult’s comments to vaccine rates as low as 30% in some areas of Marseille.

In AP-HM, 40% of staff are unvaccinated, and preparations are being made to evacuate patients to Brittany in order to relieve overburdened hospital staff.

“Since the beginning of the pandemic there have been disagreements… but with the question of vaccination he crossed a line”, Professor Jouve told Le Monde.

This month new disputes have flared as Professor Raoult tweeted that his hospital would continue to treat patients who did not present health passes, which are now required by law.

Mr Crémieux has denied that this is the case. He added: “I would prefer that information released by the IHU was published in scientific journals that would allow for scientific debate, and not via YouTube videos.

“The hospital has become a scientific endorsement for anti-vaccine and anti-pass discourse, and a contributor to conspiracy theories. This is a difficulty which must be brought to an end.”

Controversial French prof: ‘I could have halved Covid death’

23 hours ago
2
Map: Gastro outbreaks on rise in France - which areas are worst hit?

8 hours ago
4
France considers petrol cheques: What are they, who would benefit?