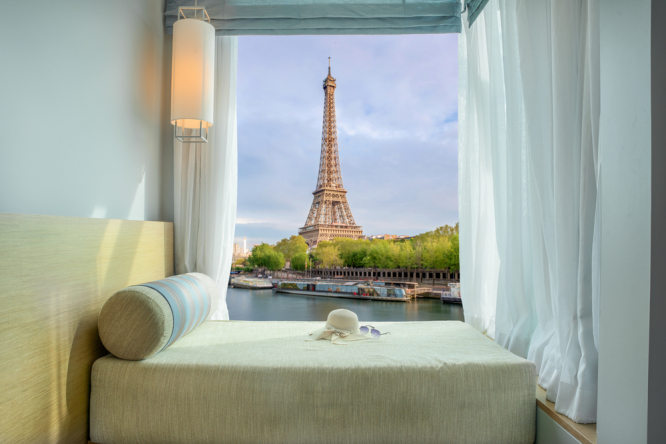 Hotel owners in the capital hope the situation will improve in September when business travellers return Pic: Travelpixs / Shutterstock

Hotels in Paris and other cities in France are struggling as numbers of foreign tourists remain low, and people in France are opting to holiday in the mountains or along the coast.

While coastal hotels in France have seen reservations for early August rise to almost 100%, it is a different story for many hotels in Paris – more than half of hotels in the capital have chosen to close for the month due to low bookings.

Elise Crouin, director of hotel Les Bulles de Paris, told FranceInfo her hotel was staying open in the hope of last-minute bookings. She said “at the beginning of July we had reservations at 35%, and eventually we got to 80% of capacity”.

Amongst those that have decided to close is France Albion, in the 9th arrondissement. Director Fabienne Ardouin said tourists in August normally come from the US and Asia. This summer, she said the hotel had “only 10% of our American guests, which is nothing. And no guests at all from Asia.”

She put part of the lack of travellers down to confusion over how to use the health pass in France, saying that in hotels “no one understands how they are supposed to be organised”.

Ms Crouin also found the health pass had been an issue for international guests as “the American pass doesn’t work in some places in France. We have been wondering in August if guests will be able to come and do the activities they want to or not.”

Read more: How will foreign visitors to France use the health pass for going out?

Demand up 10% in mountains

Meanwhile demand is increasing in hotels in mountainous regions in France with reservations up 10% for July 2021, compared with July 2020.

This comes after a difficult winter season during which ski slopes were closed and many hotels were forced to close their doors.

Jean-Luc Boch, president of l’Association nationale des maires des stations de montagne said summer numbers were up as people “needed to be in big, open spaces” after a year and a half of the health crisis.

He told FranceInfo that holiday homes and furnished apartments were popular as people felt secure staying there, knowing that they would be surrounded by family and friends and able to cook their own meals, while “being able to discover lakes, hiking trails, orienteering and everything that goes with that” in the mountains.

He added that the majority of holiday-makers were French, and there were “very few” international tourists as it remains complicated for them to visit – especially from Britain.

Read more: Covid-19 rules for travel to and from France

In Paris, the France Albion will reopen on August 23 as more guests are expected in September as business travel picks up.

Even then, there are doubts over whether professional events that usually bring business travellers to the capital will continue as usual.

Pascal Mousset, president of independent hotel chain organisation le groupement national des indépendants, said he hoped numbers of business travellers would return to levels seen in June. He said: “We know that the Home and Objects trade fair will go ahead, and we know that other events have been cancelled. So, we are caught between the two.”

Economy Minister Bruno le Maire will meet with representatives from the hotel industry on August 30 to discuss financial aid for establishments impacted by the health crisis this summer.