Trump hits out at Macron days after France visit 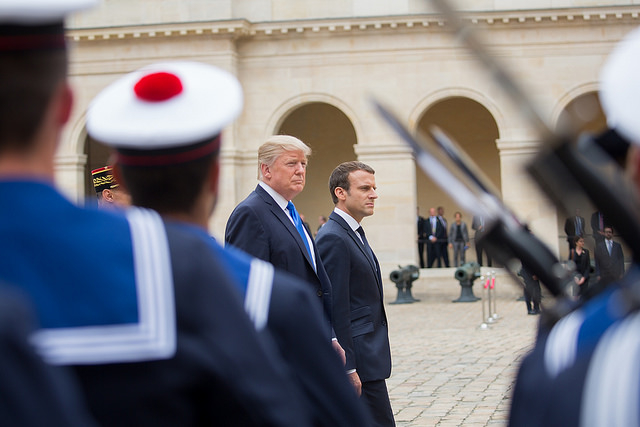 President Trump has visited President Macron multiple times in Paris, but was critical this week
By Connexion journalist

In a series of tweets, the US leader appeared to lash out at the idea of a European army - which Mr Macron and German Chancellor Angela Merkel recently suggested could be a good idea “one day” - and demanded that France “pay for NATO”.

The comments come just days after Mr Trump visited Mr Macron at the Élysée Palace in Paris on the occasion of the First World War Armistice 100 year commemorations, and called the French leader “a good friend”, with whom he shares “similar views”.

Emmanuel Macron suggests building its own army to protect Europe against the U.S., China and Russia. But it was Germany in World Wars One & Two - How did that work out for France? They were starting to learn German in Paris before the U.S. came along. Pay for NATO or not!

In a further tweet, the Mr Trump criticised Mr Macron’s “low approval rating” and said “there is no country more Nationalist than France...rightfully so”, in a reference to Mr Macron’s speech at the weekend on the difference between patriotism and nationalism.

Mr Macron had said “nationalism is a betrayal of patriotism” in his speech at the Arc de Triomphe on November 11.

The problem is that Emmanuel suffers from a very low Approval Rating in France, 26%, and an unemployment rate of almost 10%. He was just trying to get onto another subject. By the way, there is no country more Nationalist than France, very proud people-and rightfully so!........

He called French wine tariffs “not fair” and said they “must change”.

French commentators reacted with bemusement over the comments, with far-right politician Gilbert Collard saying that Trump was “absolutely right” to attack Mr Macron, but “absolutely wrong” about French wine.

In a statement, the Élysée said: “The relationship between Emmanuel Macron and Donald Trump is not always easy, but it does continue. The link between the two presidents exists. Beyond the tweets, what is most important is that they speak several times per week, and consider subjects that affect the world.”

One tweet in response called on Mr Trump to “get a grip”.

EU tariffs on wine are roughly 9p a bottle. Get a grip. https://t.co/0tkjV5neam