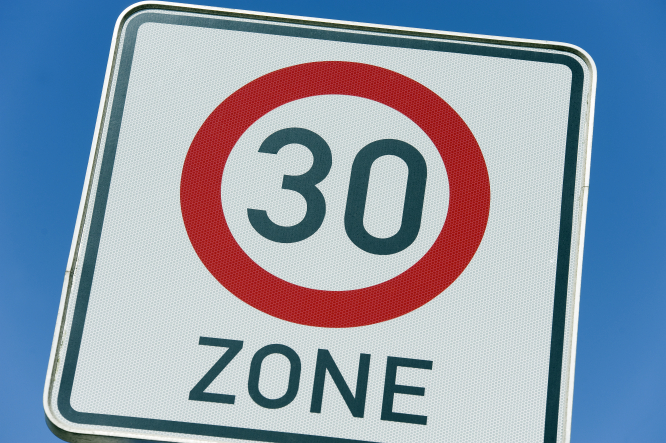 The rule will come into force on most roads in the capital from August 30, prompting ire from one drivers’ association Pic: Bildagentur Zoonar GmbH / Shutterstock

The speed limit in the vast majority of Paris will be a maximum 30km/h from August 30, it has been confirmed, in a bid to improve road safety and reduce noise.

The move has, predictably, been criticised by one of France’s main drivers’ associations.

The mairie and prefect of Paris joined together to issue the decree, which will apply the speed limit to most of the city except for the périphérique (ring road), the Maréchaux boulevards, and several other major roads.

The change was first formally announced in July and will come into force at the end of this month.

Drivers will be informed of the change with road signs at entrances to the city.

The Mairie de Paris said that the lower limit would “improve road security and nuisance noise”.

The périphérique will maintain its speed limit of 70km/h, and the Maréchaux boulevards their limit of 50km/h.

Also staying at 50km/h are the roads in the Bois de Boulogne and Vincennes, the Champs-Elysées, Avenue Foch, Avenue de la Grande Armée and rue Royale.

The mairie made the decision after a public consultation at the end of 2020. It said that “60% of roads in Paris are already limited to 30km/h”, so the shift would not be such a big change.

The public consultation results found that 59% of residents living in central areas of the capital were “favourable or somewhat favourable” towards the 30km/h speed limit in the city.

Yet road association 40 Millions d’Automobilistes has denounced the mairie’s actions as a “facsimile of a consultation”, because fewer than 6,000 people responded to the vote request (with 37% of those who did respond not actually resident in central Paris).

Similarly, it alleged that deputy mayor in charge of ecology, David Belliard, had already spoken about making the capital-wide speed limit 30km/h long before the results of the consultation were in.

Daniel Quéro, head of the association, added: “[The change is] nonsensical, incomprehensible and even dangerous when you take into account that individual car use has become a real barrier gesture over the past few months, and still will be for some time, to avoid Covid-19 contaminations.”

The mairie has defended the move, saying that a drop in speed will cut the average number of road accidents by a quarter, and of these, the number of fatal or severe accidents by 40%.

It also highlighted that the risk of a fatal collision with a pedestrian, if the vehicle was driving at 30km/h, is just 10%, according to a study by the World Health Organisation.

The mairie has also said that a vehicle speed reduction of 20km/h halves the decibels of road noise near major driving routes.

Again, this assertion is challenged by 40 Millions d’Automobilistes, which said that "below 50km/h, the main noise is that of the tyres rolling on the road, not the noise of engines".

Therefore, it said, “lowering the speed limit from 50km/h to 30km/h will not change the noise situation unless so-called ‘acoustic’ road surfaces are laid”.

Other forms of transport

The mairie also said that reducing the speed limit for vehicles will lead people to “rethink the public space” and be more likely to use so-called “soft transport”, such as walking or cycling.

It added that the move was part of its mission to increase the size of pavements, introduce more green areas to public routes, and create more cycling lanes.