StopCovid: Your feedback on contact-tracing app 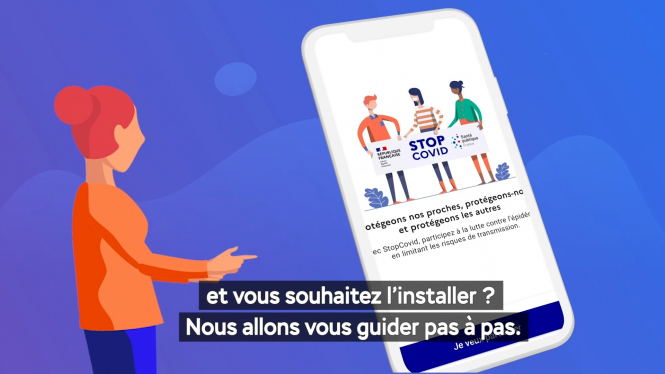 More than a million people are known to have downloaded the contact tracing app which is only aimed at people in France and was launched one week ago.

It can be downloaded both for Android phones at the Google Play store or for iPhones at Apple’s App Store. A number of readers have installed it on their phones, though none reports yet being alerted to having been in contact with a person infected with Covid-19.

The idea is that it uses Bluetooth communication on phones of those who have installed it to flag to you if you were in close, prolonged contact with a person who has identified themselves as having tested positive. You may then take further steps such as arranging for a test.

Reader John Maguire emailed to say the app was “so easy to download” it is “possibly the easiest app to complete ever”.

He added: “I was totally amazed at its simplicity. Instructions are available in English, so zero knowledge of French is required.”

Freelance writer Ben Vost, 52, who lives near Bordeaux in the Gironde, said the app is presented to him in English since his Android phone is set up to use English and it is in “excellent” English, which “clear instructions”.

“This is a well-programmed app, that I have no trouble using if it will help the situation,” he said.

Mr Vost (pictured) said he leaves it deactivated at home, but turns it on when going out.

“It becomes just another thing to remember: Mask? Check. Hands washed? Check. Shopping bag? Check. Activate StopCovid? Sure, why not.”

Read more: Your questions - When do I need to wear a mask? (Subscriber-extra)

Reader Peter Robinson from the Dordogne also had a positive view, saying it is “plain common sense” that using the app should help in the fight against Covid-19.

“It does not identify any individuals by name, but it does identify an individual phone. I will install and use it so that as a minimum I will learn if there has been any coronavirus in my neighbourhood.”

Another reader, John Counsell, from the Jura, said he downloaded it without difficulty to two 2017 Android phones as he “wanted as much protection as possible for ourselves and others”. He regretted however that it did not operate outside France especially as he lives on the border with Switzerland.

He noted that you must accept having the Bluetooth function turned on all the time, and that it provided “helpful” basic text in English. “We leave it on, so if we meet a neighbour across the garden fence for example, it is operating," he said.

Tim Baldwin from Charente also managed to download the app easily, both to a French pay-as-you-go mobile and to a British mobile with a contract with EE.

However, some readers identified some teething problems with the app:

Reader Gary Brown, meanwhile, passed on tips regarding language and country settings. He was able to download the app to both a French mobile and an American one.

He said he found that unless the Google account he is signed into on the phone has a French credit card set as its main payment method then Google thinks he is not in France and does not need the app.

Entering his French card details into his Google account solved this issue for the French phone, he said.

In order to download it to his second, American, mobile phone he also had to set the phone’s language and location, in Google Account Settings, to French and France, he said.

More on the StopCovid app

France StopCovid app: How it works and how to get it

If you have further feedback on the StopCovid app or related information, email us at news@connexionfrance.com. You can also share your experience with other readers in our Facebook group The Connexion France Subscriber Community.