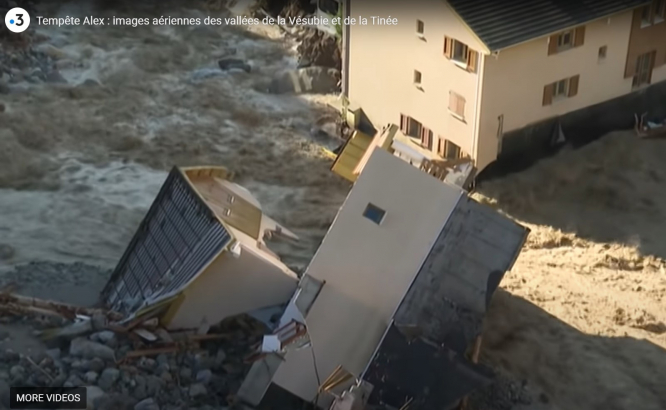 The government is expected to declare a state of natural disaster in communes of the Alpes-Maritimes that were devastated by flash floods linked to Storm Alex last weekend.

Prime minister Jean Castex told parliament the cabinet will meet today to decide the measure, which will lead to the unlocking of a special fund for insurance companies to use.

At least four people died, eight are known to be missing and another 13 are assumed to be missing after the floods, and an estimated 39 houses were washed away in the village of Saint-Martin-Vésubie alone.

The floods were caused by cloudbursts, as clouds loaded with moisture from the warm Mediterranean, pulled towards the land by the effects of Storm Alex, encountered high ground. Such phenomena are common in the autumn but seldom happen with the ferocity of last weekend.

The resulting torrential rain rushed down the three river valleys of the Roya, Vésubie and Tinée.

Roads, bridges and landslides meant some villages are only accessible by foot, or by helicopter.

A village cemetery at Saint-Dalmas-de-Tende was washed away. An estimated 150 coffins floated or tumbled in the torrent with some recovered 20km downstream. Bodies found washed up on Italian beaches are thought to have come from the cemetery.

The army is helping local authorities re-open roads, and firemen are continuing to search for missing people as well as helping villages clean up.

Soldiers and volunteers are also organising the distribution of emergency supplies of water, food and sanitary essentials.

A special train was used to forward supplies in areas where the railway had not been badly affected but the road had been washed away.

Electricity, telephone and water supplies to the villages have been cut and it is said it will take some time before emergency solutions can be put in place.

Initial estimates of damage to infrastructure alone are that it will cost €1billion to repair.

The damage has also called into question town planning principles, with many people noting that the historic hearts of villages have not been touched, while new buildings, often built close to the river, have been.

Local authority facilities have also been affected, with a fire-station and sports stadium, both recently built, among buildings which have disappeared in Saint-Martin-Vésubie.

A sawmill and a petrol station were also washed away.  Aerial images widely published show the grey scar of the river bed where the structures used to be.

Claiming for a natural disaster

The natural disaster declaration: reconnaissance de l’etat de catastrophe naturelle comes as a ministerial decree, effective from the date it is published in Le Journal Official.

It covers payments for damage directly linked to the event, but indirect costs, such as the cost of rehousing and loss of earnings, are not covered unless they are mentioned elsewhere in the insurance contract.

From the date of the declaration those affected have 10 days to declare their losses to the insurance company.

The declaration must include a complete list of loss and damage, and, where possible be accompanied by photos and bills. After major disasters however it is often acceptable to make an initial declaration in the 10 days, followed by a detailed one when possible.

Insurance companies should say if they agree with he declaration within two months, and pay out within three months after that.