Tens of thousands march in Paris amid continued unrest 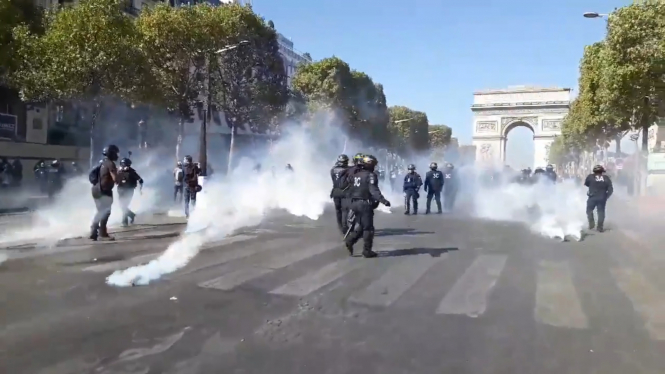 Tear gas was used to disperse protesters across Paris, including on the Champs-Elysées
By Connexion journalist

Organisers claimed there were 50,000 people overall, but the city counted 16,000 against climate change, and 6,000 against pension reform.

Protests took place across the city on Saturday September 21, including near the Arc de Triomphe, le Jardin du Luxembourg, Bercy, Les Invalides, Place de la Bastille, and the Champs-Elysées - despite the latter area being banned for protests.

Mayor Anne Hidalgo was also present at the climate change march, which organisers including the citizens’ movement ANV-COP21 dubbed a “civil disobedience action”.

Others were protesting pension reform, under the Force Ouvrière (FO) workers’ union call; while several thousand of those present appeared to be marching under the gilets jaunes banner.

There were 7,500 police present in total, with 163 people questioned and 99 taken into police custody throughout the day. Authorities confiscated items included petanque balls and mallets.

Police prepared water cannon, armoured vehicles and tear gas in the case of severe unrest, and used tear gas around the Saint-Lazare station, the Champs-Elysées and Place de la Madeleine towards midday. Several roads were blocked off.

Police also confirmed that a group of violent “black bloc” protesters had infiltrated the otherwise-peaceful climate change march, and called on other protesters to move away from violent groups to let the police intervene.

Greenpeace France - one of the proponents for the climate change march - tweeted that the “conditions for a non-violent march” had not been met, and advised protesters to “take no risks”. It also “denounced the use of tear gas [by police] on nonviolent protesters and their families”.

Some buildings, including a bank, were smashed; while a set of scooters - that had been used as a barricade between protesters and police- and a car, were torched.

Law enforcement marched to force protesters back away from the Champs-Elysées.

Head of police, Didier Lallement, said: “Faced with people who demonstrably want to take revenge on I don’t know which day, and who tell us that they ‘will give up nothing’, we reply: ‘We will be there’.”

But some protesters complained online that they had been prevented from exercising their rights to protest, as several stations and roads were closed, and many protesters were dispersed by police.

A statement from the Elysée Palace on behalf of President Emmanuel Macron, said: “The President of the Republic is following the situation closely.”

A day earlier, the President had called for calm. He said: “It is good that people are expressing themselves. But this must be done calmly. I call for this to be done intelligently...and calmly, so that our young people can visit the [heritage] buildings, and enjoy them.”

At the end of the day, interior minister Christophe Castaner thanked law enforcement, and said they were there to “keep the peace and guarantee free expression”. He added: “Violent individuals were arrested.”