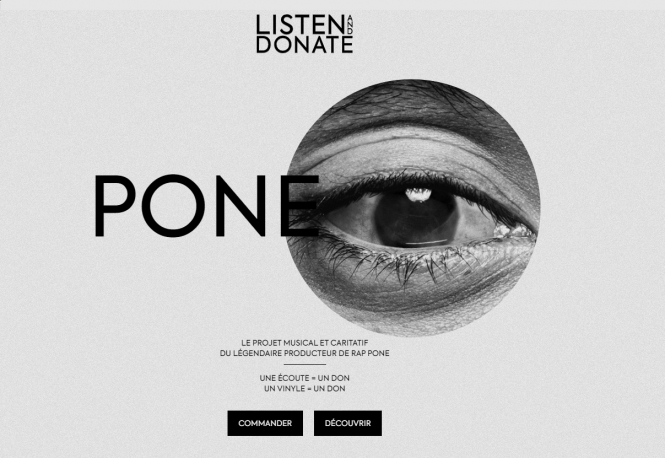 The website shows Mr Gallart's eye and explains the history and context of the new charity record, which you can also buy online Pic: Pone / ListenandDonate.com

French rapper Pone, who is paralysed by Charcot-Marie-Tooth disease, has released a new record that he composed with his eyes, in a bid to raise money to train at-home carers.

The 48-year-old, whose real name is Guilhem Gallart, was part of one of the major Marseille rap groups, Fonky Family, but his life changed in 2015 when he was diagnosed with Charcot-Marie-Tooth disorder (CMT).

CMT is an inherited disorder, which causes nerve damage, mainly in the arms and legs, but can cause total paralysis, as it has with Mr Gallart.

He is now tetraplegic, and speaks through a computer. He is fed via one tube and breathes through another.

He has since said that his illness left him with the most important things: “My head and my heart”, and added that he now has “a black belt in patience”.

The only part of his body that he can move are his eyes, with which he now communicates, writes, and composes music, using eye navigation technology designed by the late scientist Stephen Hawking.

He released his new ‘mini-album’, called Listen and Donate, on Friday June 18. With two tracks and two remixes, it is aiming to help raise money for Mr Gallart’s foundation, Trakadom (named after ‘trachéotomie à domicile’, or at-home tracheotomy).

A tracheotomy is a surgical procedure that creates an opening in the neck (windpipe, or ‘trachea’) with a tube, to allow patients to breathe directly through the airway, rather than through the nose or mouth. It is a relatively common procedure for people who have difficult breathing, for example due to a neuromuscular disorder such as CMT.

The money raised by the record is intended to go towards training at-home carers to allow such patients, who require significant help, to return home to their families. Mr Gallart launched the project due to his own fight to stay living at home with his wife and two girls, in Gaillac, Tarn.

The website features a blinking eye, and - for computers with webcams - can activate ‘navigation by eye’ to mimic how Mr Gallart uses his eyes.

It includes Mr Gallart’s ‘voice’, which explains the history and development of the album, and Mr Gallart’s history with his group, Fonky Family. Moving the mouse around reveals photos of the group and of Mr Gallart’s life.

Dr Sylvain Garnier, who helped Mr Gallart when he suffered breathing difficulties in 2017, told le Journal du Dimanche (JDD): “Life expectancy for someone with CMT is two to three years. Tracheotomy is the only effective treatment to allow us to extend that, but it’s a difficult decision, as you have to accept life imprisoned in your body.”

Mr Gallart’s wife, Wahiba, told the JDD: “[Dr Garnier’s] role was crucial. He was the one to speak to us for the first time about tracheotomy, and he spoke to his team, who were initially against the solution, which is sometimes seen as ‘treatment overkill’.”

But Mr Gallart has not regretted his choice to have the surgery, and has even described his life after the procedure as a ‘rebirth’.

He said: “I went from a storm to calm. I no longer live with the worry that I will die from acute respiratory distress.” His wife added: “He is free from this sword of Damocles, allowing him to imagine a future.”

New projects for the future

The rapper has since created his foundation, which he started in 2018, and writes an educational blog called ‘La SLA pour les nuls (CMT for Dummies)’. He is also writing a book called ‘Charcot et nous’ (Charcot and Us).

He has also continued to create music. In 2019, he published Kate & Me, which was created entirely with samples from tracks by Kate Bush. In 2020, he released an album with rapper Karlito, who said he was “overcome” and “in admiration” of Mr Gallart’s work.

Mr Gallart has spoken of his struggles to reach this point; as a result of his condition, he has suffered pulmonary embolisms, septicemia, and malnutrition, and repeatedly struggled with the question: “Why me?”

But he said: “Acceptance is the key, but we must not confuse that with resignation. You have to see the glass as ‘half full’ even if there is only one drop at the bottom. I never wanted to show an image of a man giving up; that would have been devastating for my family.”

Mr Gallart converted to Islam in 2005, and has also said that his faith has helped him cope.

He said: “Difficulties are there to make us better. Today, I see the illness as another adventure, and even though I wouldn’t wish it on anyone, it is worth living through.”

He is planning projects for the future, after this new record, and is exploring the creation of an album in homage to French singer-songwriter Claude Nougaro. He particularly enjoys composing and writing.

He said: “I was never a great literary writer, but I love writing. And technically, it’s a bit easier than composing...”

He is also just about to finish work on an illustrated fairytale book for children, including stories he tells his children at night, including a retelling of the ‘nightmare’ he suffered when he was in a coma in intensive care for 10 days.