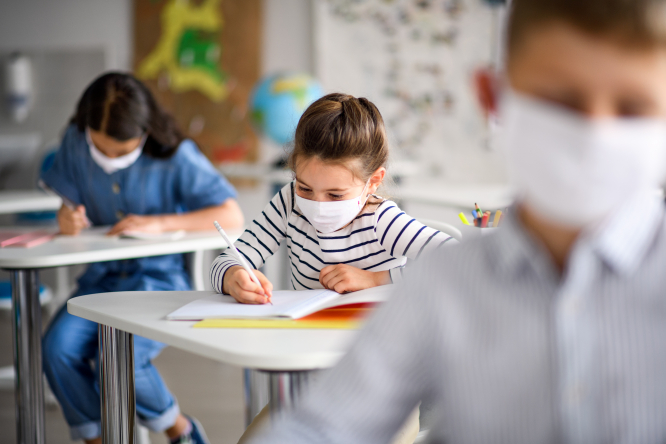 From October 4, mask-wearing will no longer be compulsory in primary schools in departments with an infection rate stabilised below 50 per 100,000. Pic: Halfpoint / Shutterstock

The spread of Covid is slowing in France, despite the return to school and work after the summer holidays.

This week, President Emmanuel Macron announced that from October 4, mask-wearing in primary schools would no longer be compulsory in “areas where the virus is circulating less quickly” and the infection rate had fallen below 50 per 100,000 people.

Several other Covid restrictions are expected to be introduced, adapted or relaxed over October and November. We take a look at what you can expect in the coming weeks.

From September 30, children over 12 years and two months will be obliged to present a health pass in order to access a wide range of public spaces and services.

This health pass can consist of proof of full vaccination against Covid, proof of the negative result of a PCR or antigen test taken within the last 72 hours or proof of having recovered from Covid within the last six months.

Beginning of October: EU regulator to give decision on vaccine boosters for over-16s

The European Medicines Agency has said that at the beginning of October it will share its decision on whether all over-16s should receive a booster Pfizer vaccine dose.

It is currently considering a request made by Pfizer to offer over-16s the additional dose less than six months after their second.

The agency has also suggested that the “evidence is becoming increasingly tangible” and that it may be necessary to administer a third dose shortly after the second for people who are immunosuppressed and who “have a poor response” to the initial doses.

In the coming months, the medicines regulator will also have to make a decision on the vaccination of young children, with Pfizer and Moderna expected to publish the results of clinical trials on five to 11-year-olds in October and November.

From October 4, fully vaccinated travellers to the UK will no longer need to take a pre-departure test before they leave France.

All four UK nations will also be merging their green and amber lists to create a single ‘red’ and ‘non-red list’.

October 4: Relaxation of restrictions in some French schools

Departments where the infection rate is stabilised below 50 per 100,000 of the population will be able to make mask-wearing optional in primary schools (écoles élémentaires) from October 4.

In these areas, the Covid alert level will move from 2 (yellow) to 1 (green) in écoles, collèges and lycées, meaning that certain restrictions surrounding PE lessons, class mixing and cleaning measures will be relaxed.

However, contact tracing will still be in place, with école classes closing is one pupil tests positive and collège and lycée students having to continue their lessons at home if they are not vaccinated and have been in close contact with the confirmed case.

Further information about the adapted protocol is available on the French government website.

October 13: A law to extend the health pass

On this day, a law that would enable the government to extend the health pass requirement beyond its planned end date of November 15 will be presented to the Conseil des ministres.

Government spokesperson Gabriel Attal has suggested the possibility of “adapting the rules” to “localised situations and to the evolution of the situation in certain areas,” so if the health pass does continue beyond November it may not be employed across the whole country.

October 15: The end of free tests

People who live in France can currently access Covid tests free of charge on presentation of their carte vitale.

However, this will come to an end on October 15, after which date French residents will need to pay €43.89 for a PCR test and €25 for an antigen test.

Free tests will only be available for those with a prescription.

By making tests payable, the government aims to encourage people to get vaccinated, while lightening the financial burden placed on the state.

To date, Covid tests have cost the state €5billion

Obligatory vaccination was introduced for certain professions on September 15, after which time workers have had to be able to prove either that they have been fully vaccinated or that they have received one vaccine dose and had a recent negative Covid test.

By October 16, those who had only had their first dose must have also been for their second. They will not be considered fully vaccinated until one week after their second dose of the Pfizer, Moderna or AstraZeneca vaccines, or four weeks after the Janssen jab.

The only exceptions to this rule are people who can present evidence that they are exempted from receiving the vaccine or who have recently had Covid and have been unable to get vaccinated.

Around October 25-29: No more PCR tests for vaccinated travellers to England

From “later” in October, the UK government has announced that fully vaccinated travellers to England will not need to take a day two PCR test, and can instead carry out a cheaper lateral flow.

Scotland will also "align with the UK post-arrival testing regime" but details have still to be finalised.

Wales has not yet decided whether to follow suit and all people travelling to Northern Ireland will still need to take a day two test.

The government’s announcement stated that the change for travel to England should be in place "for when people return from half-term breaks,” so between October 25 and 29.

However, all non-fully vaccinated people will still need to take pre-departure, day two and day eight tests, and quarantine on arrival.

Everyone coming from a red list country will also have to observe these measures whether fully vaccinated or not.

Beginning of November: Travel to the US reopens

From the beginning of November, fully vaccinated people from the EU will be allowed to visit the US for the first time since its travel ban was introduced in March 2020.

Read more: US to allow vaccinated visitors from the EU to come from November

Read more: France-US travel: What is known about the plan for November reopening?